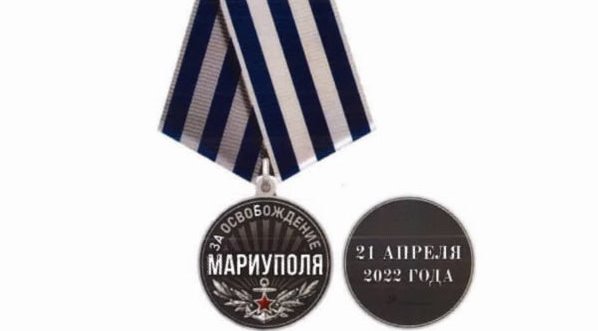 Russia announces a medal for the ‘liberation of Mariupol’ as President Putin deems the invasion a ‘success’.

The Azovstal steel plant in the city remains in Ukrainian hands despite recent attacks.

RUSSIA has announced that a medal for the ‘liberation of Mariupol’ is set to be established as Russian President Vladimir Putin has deemed the invasion and capture of the Ukrainian city a ‘success’.

In another propaganda push from Putin, the ‘liberation’ of the Ukrainian city of Mariupol has resulted in an estimated loss of 20,000 civilian lives and has left the city completely destroyed. While Putin declared the military operation in the Ukrainian city a ‘success’ as Ukraine troops have been forced into hiding in tunnels underneath the Azovstal steel plant alongside 1,000 civilians.

The head of the Donetsk People’s Republic, Denis Pushilin, announced the possible introduction of the medal via his social media accounts, writing: “The battle for Mariupol will occupy a special place in the history of the Donbass liberation operation.

“The Azov National Battalion, entrenched in the city, showed particular cruelty towards its residents. The militants did not just shield the population as a human shield. The nationalists terrorised the people, taking them hostage: turning multi-storey apartment buildings into strongholds and firing positions, they drove Mariupol residents out of their flats, holding them in basements without food or water.”

He added: “They used direct artillery fire on houses and set floors on fire. Neo-Nazi criminals shelled columns of refugees to prevent the population from evacuating the city. At the same time, our proposals to organise humanitarian corridors were ignored. The militants used the industrial zones of large enterprises as fortified zones.

“All this made it very difficult to liberate Mariupol, as the main task of the DNR and Russian soldiers was to save the city’s residents.

“The liberation of Mariupol saw massive displays of heroism on the part of our soldiers. Under heavy enemy fire, they fought literally for every house in fierce battles. At the same time, our soldiers evacuated local residents from dangerous places and gave their rations and water to exhausted people. It is not without reason that appreciative Mariupol residents thanked the DNR and Russian fighters for saving their lives,” he continued.

“In this regard, I consider it advisable to establish a medal “For the liberation of Mariupol” and give it to soldiers who have distinguished themselves in the battles for this city.”

According to local media reports, the medal will be dated April 21, which Russian leaders note as the ‘day that Mariupol was liberated’.

The date coincides with the televised meeting between President Putin and Russia’s Defence Minister Sergei Shoigu.

During the meeting on April 21, Putin and Shoigu both claimed Russian troops had “liberated” Mariupol, something that has been denied by the Mayor of the war-torn city, Vadym Boichenko.

“There were no plans to liberate the city. It was a plan of destruction,” Boichenko told Reuters on April 22.

He added at the time: “Today at all levels, we only talk about one thing – that we need a ceasefire, we need a full evacuation of the 100,000 Mariupol residents who are prisoners of Russian forces and we need to free all the people who are at Azovstal.”