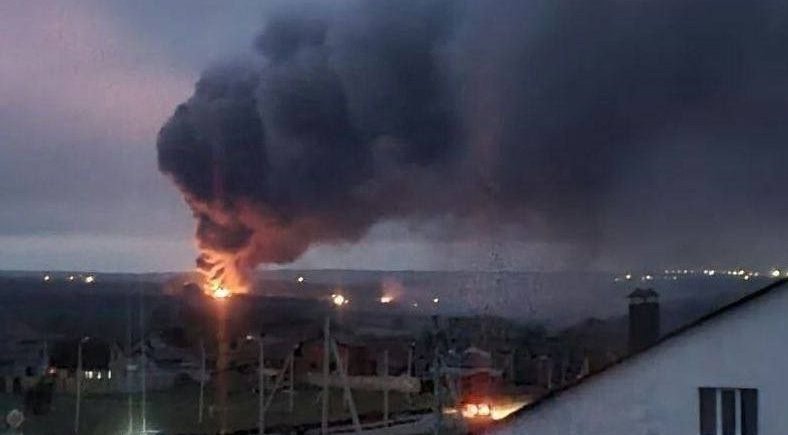 The ammo facility in Belgorod is located close to the Ukrainian border.

A RUSSIAN ammunition depot exploded on Wednesday, April 27 and questions have been raised as to whether Ukraine had struck again following similar unexplained fires in Russia.

The ammo storage facility, located in Belgorod close to the Ukrainian border, exploded in the early hours of April 27, according to regional governor Vyacheslav Gladkov via Telegram.

Gladkov reported the fire near the village of Staraya Nelidovka, less than 20 miles from the Ukrainian border.

“At about 3.25 am, I was woken up by a loud sound like an explosion. So far, not a single duty service of the city and the region has found the cause of this sound. The search continues, and the results will be reported immediately. While I was writing this message, three more explosions sounded,” Gladhov wrote in his original message.

Gladkov explained further: “I just got in touch with the head of the Golovinsky rural settlement, Denis Zolotukhin. An ammunition depot is on fire near the village of Staraya Nelidovka.

“There is no destruction of residential buildings or houses. There were no casualties among the civilian population.”

He then went on to announce: “According to the report of the chief head of the Ministry of Emergency Situations for the Belgorod Region, Sergei Potapov, there were no casualties among the civilian population.

“There were no damages to residential buildings and houses.”

On April 25, similar unexplained fires broke out in Russia and were being attributed to Ukrainian drones.

Two huge fires burned at oil facilities in Bryansk, Russia and were apparently caused by ‘drones from Ukraine’.

The Bryansk emergencies Telegram channel said on April 25 that according to initial investigations, the explosions that rocked the Transneft-Druzhba Oil Depot and fuel storage facility at a military unit were ‘delivered with the help of drones’.

They reported that following the alleged drone attack, one of the tanks caught fire, while the second tank – the largest, containing 20 thousand tons of fuel – was empty at the time of the hit. It was quickly extinguished by an automatic fire extinguishing system.

According to their sources, more explosions occurred half an hour later on the tanks in the Fokinsky district of Bryansk. “As in the case of the oil depot, the tanks were bombed, most likely from a drone,” they said.

Previous to these fires, a huge blaze broke out at a ‘top-secret’ Russian defence research facility in Tver.

The fire, which was blamed on old wiring, is believed to have killed up to 25 people, although Russia are being accused of covering up the number of actual deaths.