WATCH: Shocking moment Police are kicked out of neighbourhood in Barcelona by violent mob 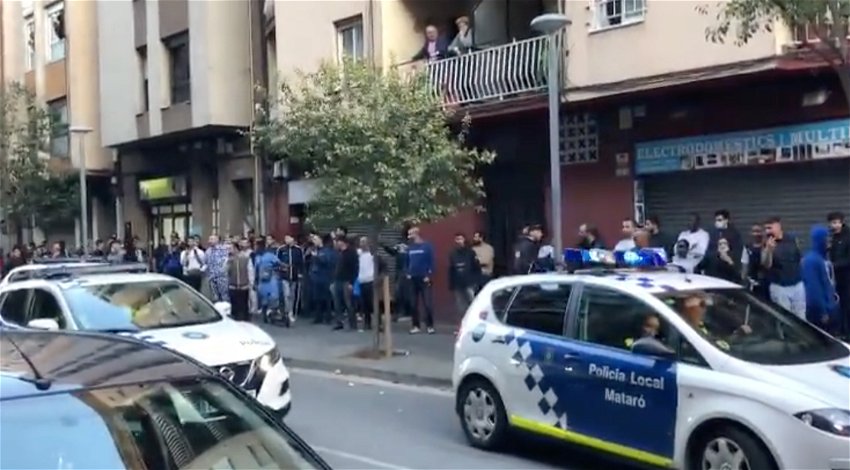 Local Police were kicked out of a neighbourhood in Barcelona by a violent mob over tension following a parking fine.

The Rocafonda neighbourhood of Mataro, Maresme, Barcelona, was the stage to a violent scene of social conflict on the evening of Tuesday, 26, April, when police were kicked out of a neighbourhood by a violent mob. Most of them were reportedly of Moroccan origin, chasing local police officers out of the neighbourhood after one of them had tried to place a fine on a vehicle that had double-parked in Pau Picasso street.

The incident reportedly began shortly after eight o’clock in the evening, with the individual responsible for parking illegally, reacting angrily and provoking a large number of residents of the neighbourhood to join him in his confrontation of the police.

“This just happened in #Mataró. A pack of Moroccans attacking the local police for doing their job. People come to Spain to adapt and to work. Whoever comes to commit a crime, deportation.” read a tweet posted by @Escribano_R, showing a video of the riot.”

“Mataró police withdraw from a neighborhood!!!! They are kicked out!!! What kind of world do we live in? Where is order?” posted @PedroGonVOX on Twitter.

The Mayor of Mataro, David Bote, has since sent out a message warning that he will not allow the type of behaviour seen in the Barcelona neighbourhood to continue.  “In Mataro there is no place for violent behaviour, wherever it comes from, I condemn it outright and I support the local police who are doing a great job”. The Mayor assures that they will study the facts and take the necessary measures to maintain order and coexistence.

The Local Police of the area of Barcelona posted a tweet stating:  “@DBotePaz the councillor for Public Safety @JC_Jerez and the spokespersons of the municipal groups express their support for the Local Police, condemn the violence and appeal for respect, civility and to continue working with all the mechanisms to guarantee coexistence.”