Malaga’s Casabermeja suffers incredible hailstorm at the end of April 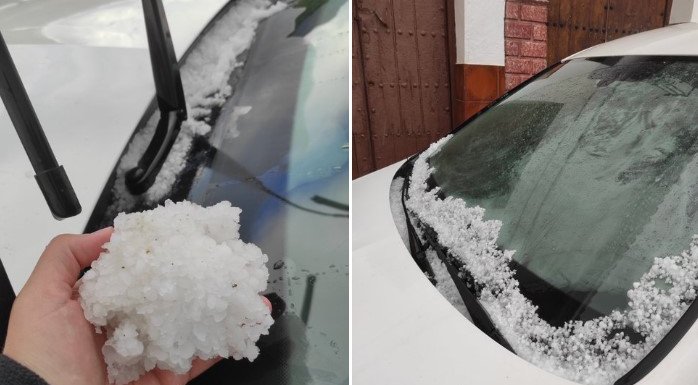 According to Casabermeja Local Police, the sudden hailstorm that occurred today, Thursday, April 28, lasted around 20 minutes and did not cause any significant damage. Many parts of the Malaga municipality reportedly suffered this incredible event, accompanied by an electrical storm during the early hours of the afternoon.

At around 2pm, residents were stunned by a large amount of thunder and lightning, with the heavy deluge of hailstones following not long after. As fast as it had started, the storm passed over and disappeared.

Several parts of the Serrania de Ronda and Axarquia regions reported this unlikely phenomenon which took place just as the month of May is approaching. Hail covered the ground in the towns around the Sierras Tejeda and Almijara areas.

AEMET, the State Meteorological Agency, has a yellow weather warning in place for storms throughout Malaga province until 9pm this evening.

A similar freak weather situation occurred yesterday, Wednesday 27, in points of the Serrania de Ronda. In the town of El Burgo, hail covered several sections of the road in a sheet of white. “It was raining a lot and it melted quickly”, explained Fatima Berlanga, the town’s deputy mayor.

Various parts of Malaga capital and the Guadalhorce Valley were hit by heavy rain. The municipality of Cartama was one of the most affected, where some streets were flooded in a matter of minutes.

According to data from the Hidrosur network, 16.4 litres/m² were recorded between 3pm and 4pm. Another 14litres/m² accumulated at the Aljaima station, as reported by malagahoy.es.