Couple gets married on flight after cancellations ruin their wedding 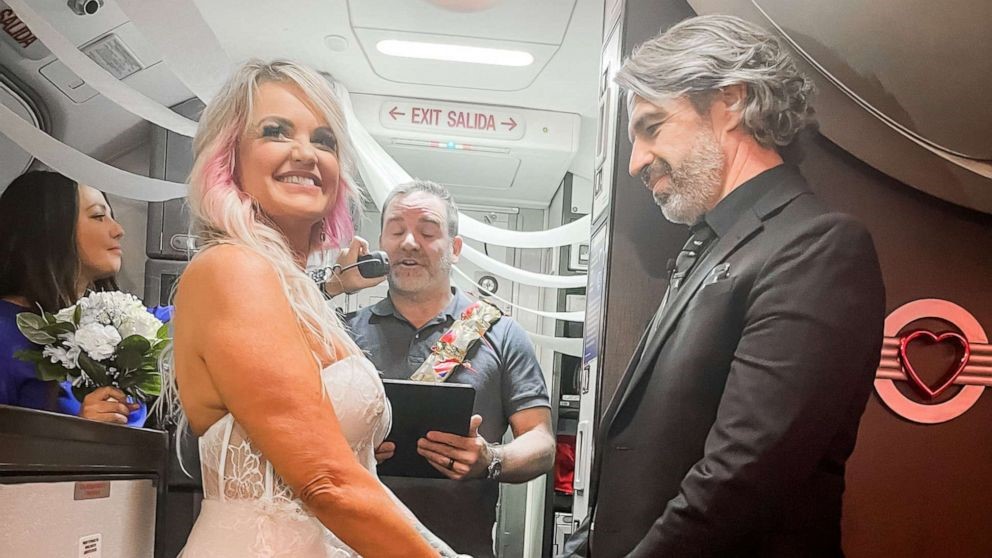 A couple travelling to Las Vegas to get married got a wedding of a lifetime after flight cancellations ruined their wedding plans, with passengers of SouthWest flight 2690 acting as witnesses.

The captain of the flight en route to Phoenix welcomed passengers on board and to the wedding of Pam and Jeremy Salda. The couple had planned to fly to Las Vegas to get have a small legal wedding in the US, they do have a destination big bash wedding planned for Mexico in August.

Their plan was to go to the airport, fly straight in and head from the airport to the altar – but that’s when things started to go wrong.

Pam told ABC News: “We’re waiting on our next plane and we just start seeing the weather delays … and more delays, and it’s getting pushed back. We’re getting stressed because we have to be at the chapel at 9 p.m., we’re the last one of the day.”

With flights delayed the couple hatched another plan care of a passenger Chris Mictham who also happened to be on his way to Vegas. His flight was also cancelled but as he is an ordained minister he offered to help if they missed their appointment at the chapel.

Friends sprang into action and they booked another flight but from Dallas Love Field Airport, but this flight required a connection in Phoenix.

Welcoming the passengers on board, the captain noticed the wedding dress and he enquired were they headed to Las Vegas to get married, “And I said, well, we’re going to try, but if not I think I’m just going to get married right here on this plane. And he said, really? I was like, yes.

“The captain himself says I’ve been a pilot for 33 years and 20-plus of that has been with Southwest,” Pam said. “And never once have I been asked to have a wedding on the plane.”

Pam said: “As soon as we kind of get up to the altitude, people can start moving around. I’m telling you, the flight crew, they just spring into action. They’re taking toilet paper and making streamers at the front. They made Chris [Mitcham], the minister, like a little sash out of snack packets and they clipped it together with cocktail spears.”

The crew dimmed the light and they played “Here Comes the Bride” while Pam walked down the aisle. Mitcham, a former TV producer and had video equipment to capture the special moment with another woman a professional photographer, offered to take photos of the ceremony.

One passenger even passed a notebook around for other witnesses to the wedding to sign.

Pam said: “She made it a guest book, and it got passed to the entire plane, they didn’t just write the names, they wrote sweet notes […] and they wrote their seat number and their name.”

A leftover doughnut offered by a passenger became a makeshift wedding cake and off they went.

Pam added: “Everybody couldn’t have been kinder, nicer. We obviously delayed the drink service, but no one seemed to care.”

Southwest said that it was “thrilled” to be able to help the couple get married. A flight attendant on board even stood in as maid of honour for the ceremony.

After the couple tied the knot, the flight crew provided free drinks for everyone. .

Pam said: “I think they had experienced some delays and weather things as well, and so everybody was kind of feeling the stress, but everybody couldn’t have been nicer and sweeter and just said how what a great experience it was.

“And that’s what we like about it is hopefully we brightened somebody’s day.”

Southwest sent the couple who got married on their flight, best wishes and said they were glad they could help after cancellations ruined their wedding plans.