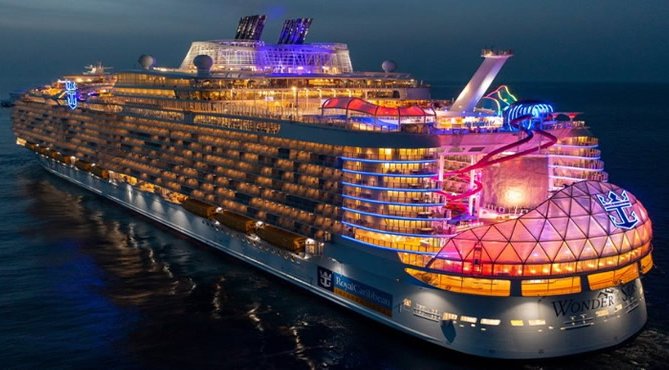 Carlos Rubio, the president of the Port Authority of Malaga, this Saturday, April 30, highlighted the importance of the Port within the sector. He indicated that throughout 2022 he expects to recover a number of stopovers similar to that before the pandemic. However, he acknowledged that cruise ships are arriving with low occupancy, not exceeding 50-60 per cent.

Mr Rubio was speaking during the reception held to celebrate the arrival of Royal Caribbean’s ‘Wonder of the Seas‘, the largest cruise ship in the world. She docked early this Saturday in the Port, and remained there until six in the afternoon.

On the occasion of this special visit, held at the foot of the dock, representatives of the port, including Francisco de la Torre, the mayor of Malaga, and Nuria Rodriguez, the delegate for Tourism of the Junta de Andalucia, presented a commemorative plaque to the ship’s captain.

The arrival of this cruise ship “consolidates Malaga as an important port within the sector”, declared Rubio, adding that he considers it “a port of reference” for entry to the Mediterranean. The enormous vessel entered Malaga from the Atlantic, transporting  3,600 passengers on board.

These figures “show that ships still come with a low occupancy, but there is no doubt that in the number of dockings, we are gradually recovering normality”, he added. “There are still Covid restrictions and limitations, and therefore occupancies are not higher than 50-60 per cent”, Rubio elaborated.

The Port Authority has returned this week from the Seatrade Cruise Global in Miami, the most important international cruise fair in the sector. The time was spent discussing with different shipping companies to see their future plans in Malaga.

One of them, according to Carlos Rubio, has been Royal Caribbean itself, which he explained, “is planning to have more stops in Malaga, not as a base port at the moment, but as a transit port, which is also interesting”, as reported by 101tv.es.