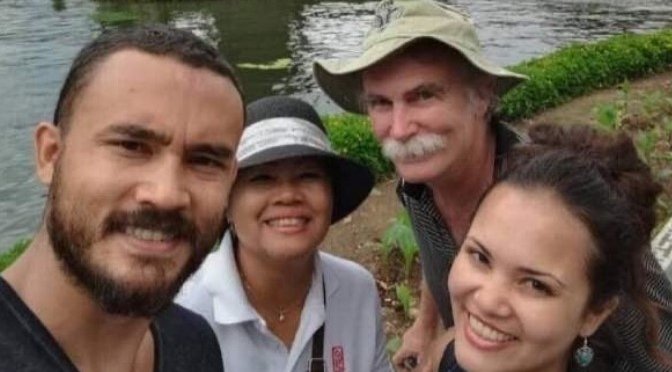 Image of Jim Fitton with his family. Credit: [email protected]_Hobhouse

Campaign to free a retired British geologist facing the death penalty in Iraq collects 95,000 signatures in a few days

Pressure is growing on the British government for it to take urgent action in the case of Jim Fitton, a 66-year-old retired British geologist who is being held in Iraq and facing the death penalty.

The Iraqi authorities have detained Mr Fitton for the past five weeks, accusing him of attempting to smuggle ancient artefacts out of the county. This is a crime that a crime carries the death sentence if the father-of-two is found guilty.

According to his family, as part of an organised archaeology and geology tour last March, Mr Fitton visited a site in the southeastern Iraqi city of Eridu. While touring the site, he apparently collected some souvenirs of broken pottery and stones.

At Baghdad airport, customs officials found the 12 pottery shards and Mr Fitton was detained. The charge he is accused of, under Iraqi law, states, “whoever exported or intended to export, deliberately, an antiquity, from Iraq, shall be punishable with execution”. His case is scheduled for sentencing during the week starting May 8.

A campaign to free him has so far collected around 95,000 signatures just days after being launched by his family. During his career, Mr Fitton worked for gas and oil companies as a geologist, and since retiring has lived with his wife Sarijah in Malaysia.

In a statement speaking of the response to the campaign, his family said, “Jim really appreciates the support from old colleagues, good friends, kindred spirits, and complete strangers who have not allowed this to go unnoticed. We will continue to fight while we continue to have you at our backs”.

A lawyer for the family has drafted a proposal under Iraqi law to have the case closed before trial. For this to have the full effect though, they insist it needs the Foreign Office to “put their weight behind the plan and endorse it”. If this was to happen then hopefully a high-level meeting with Iraqi judicial officials can be secured.

“We are pressing the Foreign Office to intervene but sadly they are continuing to refuse”, commented the Liberal Democrat MP for Bath, Wera Hobhouse. She has even raised his case in the House of Commons with ministers.

“I cannot understand why the Foreign Office is not intervening when Jim’s life lays in the balance”, she continued. “The Foreign Office must do everything in their power to bring Jim back home to his family”.

Last week, in a letter to Ms Hobhouse, Amanda Milling, a Foreign Office minister, wrote, “We understand the urgency of the case, and have already raised our concerns with the Iraqi authorities regarding the possible imposition of the death penalty in Mr Fitton’s case, and the UK’s opposition to the death penalty in all circumstances as a matter of principle”, as reported by news.sky.com.