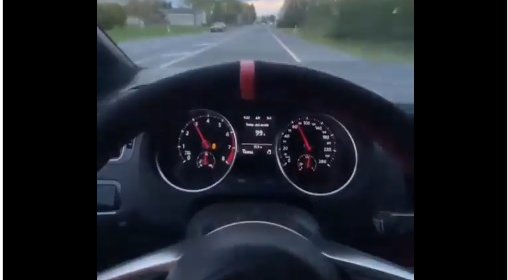 Driver who travelled at 150 km/h through a school zone identified by police Source: Guardia Civil

The May Day weekend has seen thirteen people lose their lives, of which ten were considered vulnerable road users.

Included in the death toll were six motorcyclists, two cyclists and two pedestrians.

The update provided details of two fatal accidents, one in Marbella where a truck ran over a cyclist on the A-7 and the other in León, where a cyclist was run over by a tractor.

On Sunday, ten people lost their lives in nine traffic accidents, of which five were motorcyclists.

The Civil Guard (police) in Galicia have identified a driver who travelled at 150 km/h through a 50 km/h school zone.

According to the police, the driver recorded the feat on his mobile phone and then published it online, a video that came to the attention of the police and which was used to track him down.

The incident, which took place in Outeiro de Rei, Galicia, saw the car speed through the school zone at more than three times the limit.

The driver’s car has been seized by police, and he now faces charges of crimes against road safety, reckless driving and speeding.

According to data provided by the General Directorate of Traffic (DGT), ten people lost their lives in nine fatal accidents on interurban roads this weekend. Two of those who died were pedestrians.

The figures relate to the period Friday, April 29th until Sunday, May 1st. During the same period, six people had to be hospitalised after suffering serious injuries in the accidents.

Officials believe the number will rise as people head back home after what has been a long weekend for many. Road conditions are expected to be poor at times, with rain and hail forecast in areas.

Making the announcement today, the police reminded drivers who do post video online of them breaking the law, that they will be pursued and charged as was the driver who travelled at 150 km/h through a school zone.