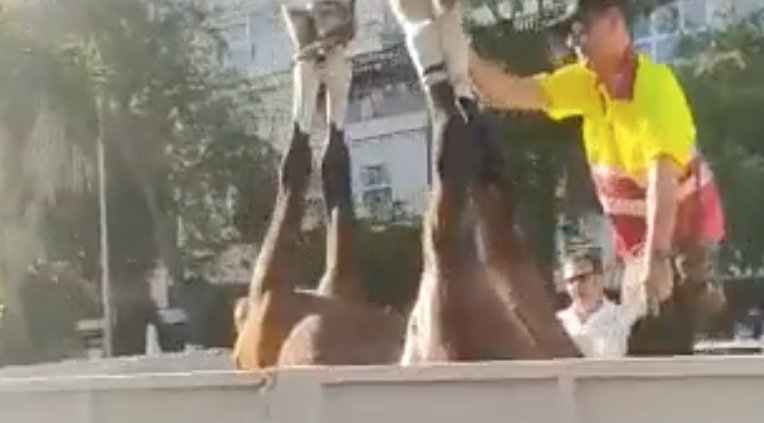 Spain’s Animalist Party Against Mistreatment of Animals (PACMA) has reported the tragic death of a horse at the Seville Fair in Andalucia Spain.

The Seville Fair is held in Seville, the Andalusian capital, Spain, the fair normally begins two weeks after the Easter Holy Week, beginning at midnight (the start of a new day) and running for seven days. This year it began on 1, May, and will end on 7, May, after being celebrated for the first time since the Covid-19 Pandemic.

“Another year, another exploited horse dies during the Seville Fair. How long are the administrations going to continue encouraging this [email protected], @Ayto_Sevilla, Aren’t you embarrassed? Stop allowing the use and exploitation of animals!”

“This is not the first time we have reported similar events. In 2016, a horse collapsed at the fair and was unable to get up. Two years earlier, we also reported the death of another draught horse, probably “due to lack of water and exposure to high temperatures with no place to shelter from the sun”. In 2018, another horse also died in similar conditions, being reported in this case by the Local Police of Seville, who explained that the person responsible had not fed it all day and that it was suffering from a stomach ailment.”

“In 2019, a horse convulsed before the astonished gaze of hundreds of people, who indignantly clamoured in the video shared at the time for an end to the exploitation of these animals: “let them ride a bicycle, that’s what they’re there for”, says a passer-by.”

“In view of what has happened, we will consider taking legal action to hold both the Seville City Council and the Board of Andalucia themselves responsible, which has been taking a stance on the side of animal exploitation for years and has shown no intention of seeking alternatives.”

“There are already too many “isolated cases” that take place during the celebration of popular festivities that involve the use of animals, due to the fact that the local and autonomous administration systematically ignores the reality and does not desist in the use of animals for leisure purposes.”