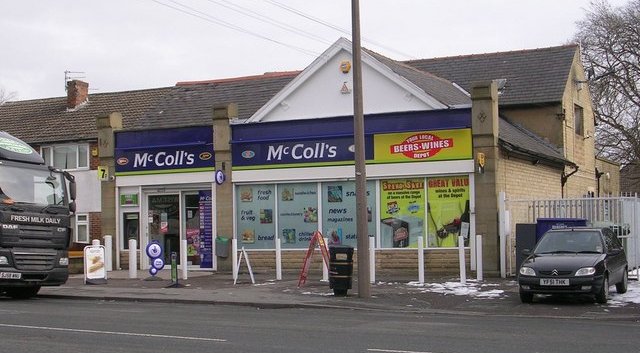 The popular chain of convenience stores, McColl’s, is said to be days away from going into administration, with the group set to collapse without further investment. Listed on the London Stock Exchange, the company employs about 16,000 people, or roughly 6,000 on a full-time equivalent basis, jobs that could go should the group collapse.

Despite a cash injection of £30 million late last year, the group has struggled and is in need of new investment. Discussions are believed to be ongoing with investors delaying what many in the industry believe to be inevitable, however so far the company has not been able to raise the required cash.

McColl’s has a partnership agreement with the supermarket chain Morrisons and with the petrol retailer the EG Group. There is some speculation that either of these two companies could make a formal bid to take over the company, however neither has yet to comment or make a move.

The company, who earlier this week issued a stock exchange warning saying that it would not be able to meet a statutory deadline for filing its annual results, has roughly 1,100 stores of which 200 operate in partnership with Morrisons

A rescue deal put forward by Morrisons owners doesn’t appear to have gained traction, although some believe a revised deal may be forthcoming. The proposed deal involved the banks writing off part of the debt, along with a new investment from Morrisons.

McColl’s had said they would be expanding the number of stores in Morrisons, but the lack of cash has meant these plans have been put on ice, resulting in the company’s value plummeting with the shares now barely worth £3 million.

The company is understood to owe around £170 million to a syndicate of British banks.

Should McColl’s go into administration, it would be the largest insolvency in the UK retail sector by size of workforce since the collapse of Edinburgh Woollen Mill Group in 2020. It would however not be the first to collapse following the pandemic and the changing shopping habits of consumers.

Jonathan Miller, McColl’s recently departed chief executive who is understood to have invested £3 million of his own money, said in December that the financial year had “undoubtedly been a tough year for the business, starting with the impact of COVID-19 restrictions and ending with the widely reported and ongoing supply chain challenges.

“Although we have been able to partly mitigate these external factors, they have still had a significant impact on underlying trading.”

McColl’s said in a statement: “As previously disclosed on 25 April 2022, the Group remains in discussions regarding potential financing solutions for the business to resolve short term funding issues and create a stable platform for the business going forward.

“However, whilst no decision has yet been made, McColl’s has confirmed that unless an alternative solution can be agreed in the short term, it is increasingly likely that the Group would be placed into administration with the objective of achieving a sale of the Group to a third-party purchaser and securing the interests of creditors and employees. Even if a successful outcome is achieved, it is likely to result in little or no value being attributed to the Group’s ordinary shares.”

The impending collapse of the convenience store group, McColl’s, comes on the day the Bank of England raised interest rates sharply, causing the pound to plummet.