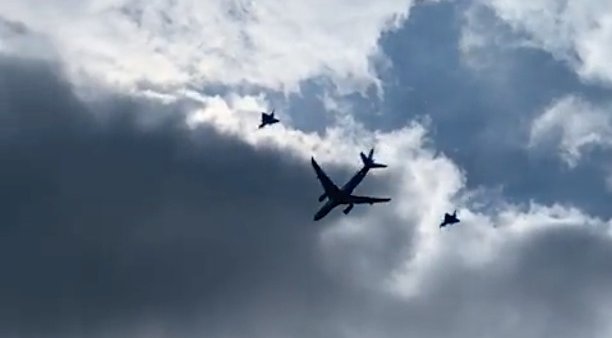 The passenger plane flanked by two fighter jets over London was pre-planned.

UPDATE 2.17 pm (May 5) – Boris Johnson has welcomed Japanese Prime Minister Fumio Kishida to the UK on Thursday, May 5 and has posed for pictures outside Downing Street – after Mr Kishida’s passenger plane arrived over London flanked by two RAF fighter jets.

The UK Prime Minister welcomed Mr Kishida to the UK with hopes of strengthening trade and defence cooperation between the two countries.

Speaking ahead of the meeting on May 5, Mr Johnson, who was recently grilled by GMB host Susanna Reid, said: “As two great island democracies … the UK and Japan are focused on driving growth, creating highly skilled jobs and ensuring we remain technology superpowers.

“The visit of Prime Minister Kishida will accelerate our close defence relationship and build on our trade partnership to boost major infrastructure projects across the country – supporting our levelling up agenda.”

The arrival of Mr Kishida was made extra as he travelled in the RAF Voyager Vespina, which sported a Union Jack tail and was escorted over the capital by two RAF Typhoons.

The sight of the aircraft travelling with two RAF jets on either side caused slight panic for onlookers but was quickly cleared up by an RAF tweet, which revealed the pre-planned journey.

You may see a RAF Voyager & two RAF Typhoons flying over central London this morning. This is a pre-planned flypast to welcome the Prime Minister of Japan to the UK. @Jpn_PMO @10Downingstreet pic.twitter.com/DJahf5mbaM

ORIGINAL 12.36 pm (May 5) – A passenger plane was spotted being escorted by two two fighter jets over London on Thursday, May 5. However, despite initial fears, the spectacular sight was pre-planned by the RAF.

The plane was being escorted by the fighter jets ahead of a special meeting scheduled for UK Prime Minister Boris Johnson.

As revealed in a statement from the RAF, the plane is carrying the Prime Minister of Japan, Fumio Kishida, ahead of his meeting with Mr Johnson on May 5.

Officials tweeted: “You may see a RAF Voyager and two RAF Typhoons flying over central London this morning.

“This is a pre-planned flypast to welcome the Prime Minister of Japan to the UK.”

The two Typhoon fighter jets and the RAF Voyager Vespina, finished with a Union Jack painted tail, set off from Brize Norton before flying over central London.

According to recent air traffic alerts, the turn points were:

It has also been revealed that the UK Prime Minister is expected to announce a “landmark defence partnership” known as the Reciprocal Access Agreement, according to the Express.

Social media was flooded by users who had seen two fighter planes flanking a British Airways plane towards a London airport and wondered what was going on.

One person on Twitter noted that they had seen the convoy flying over Surrey.

“In Surrey, just seen a British Airways passenger plane fly over with 2 fighter jets in close formation flanking either wing. Any idea why?” they said.

Another wrote: “An airliner aeroplane has just flown LOW over Trafalgar Square flanked by fighter jets!!”

“What’s going on here then? @British_Airways passenger plane being escorted by 2 RAF Tornados into an Airport over London,” another person said.