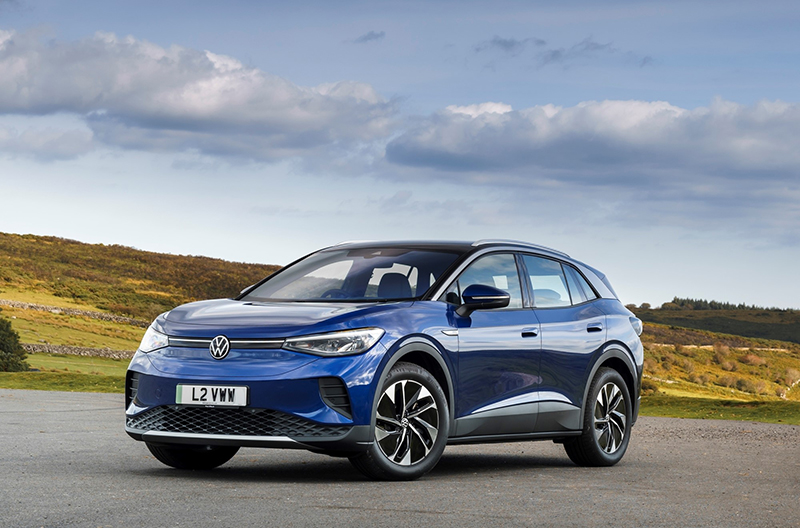 THE advent of the electric car has produced an array of striking car designs from the stylistically avant-garde to interiors that resemble a modern incarnation of a Conran shop.

However, for some manufacturers it’s evolution rather than revolution and Volkswagen is arguably the main proponent of this ethos. It has served them well as can be seen by the second-hand values of cars like the Golf. The purpose-built ID range of EVs – ID3, 4 and 5 – is a complete range of models from hatchback, to SUV and Coupe.

Prices for the line-up start at €42,626/£35,835 and its design is such that the uninformed would be hard pressed to know it doesn’t have a combustion engine under the bonnet. Unless of course it glides past you in a car park or city street. It’s essentially an EV Golf in all but name and many people I spoke to agreed, in fact some even thought it was a new Golf.

My test model was the ID4 SUV that offers six trim levels with prices starting at €43,479/£36,550. There are four battery options with ranges stretching from 213 miles up to 320 miles, and power options from 148PS up to 204PS. As with MPG figures the ranges quoted are ideal world, which you are unlikely to achieve.

Having said that some EVs are now getting much closer to their potential maximum range and the ID4’s range seemed pretty good. Standard fare includes navigation, dual zone climate, heated front seats, wireless mobile phone charging and LED lighting. The interior is functional, although looks better in this writer’s view in lighter colours, with nicely clear graphics.

Gear changes, such as they are in an automatic, are controlled via a lever mounted to the side of the steering wheel instrument panel, not unlike a column change for those old enough to remember such things. On the road the ID4 is commendably refined with little in the way of road or wind noise and there’s a general feeling of airiness and space.

Power is good, as with all EVs, and the ID4 can easily leave other traffic in its wake, meaning a keen eye needs to be kept on prevailing speed limits. It handles well and feels confident even on winding cross-country roads. It’s one of those cars that feels so comfortable longer distances shouldn’t be an issue, not least due to its electrically induced silence. If you’re looking to switch to a practical EV then the ID range really has to be on short list.