Alcaraz beats Nadal to reach the Masters 1,000 semi-final in Madrid 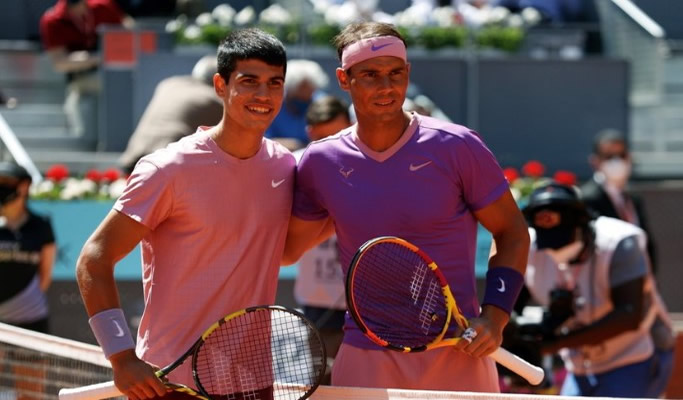 Carlos Alcaraz reaches the semi-finals of the Masters 1,000 in Madrid after defeating Rafael Nadal for the first time

Carlos Alcaraz carved out an incredible 6-2, 1 -6, 6-3 win this afternoon, Friday, May 6, over his legendary countryman, Rafael Nadal in the Masters 1,000 in Madrid. This was the 19-year-old’s first-ever victory over Spain’s No1 tennis player and sets him up with a semi-final spot, the youngest player ever.

Despite suffering a fall at the start of the second set, the young Spaniard managed to keep his poise and battle through for a brilliant win. Alcaraz will now find himself among the world’s top seven players next week, irrespective of the rest of his time in this tournament.

Nadal came into the Madrid competition at the Caja Magica facility off the back of six weeks out with cracked ribs. It took the young man from El Palmar in Murcia a total of two and a half hours to finally take the match. He looked the sharper of the two and appeared to be in better physical shape against the holder of 21 Grand Slam singles titles.

He has to hope now that the ankle injury sustained in a spectacular fall at the start of the second set of this match will not give him any worries. In fairness to the young star, he came back on court with his foot bandaged and clearly showing signs of discomfort as play resumed.

At one set each, the outcome was anybody’s guess, but his grit saw him through to the end. A semi-final showdown with world No1 Novak Djokovic now awaits Alcaraz. The Serb beat Poland’s Hubert Hurkacz in straight sets, 6-3 and 6-4. These two have never played each other yet in any tournament.

This was Nadal’s second defeat of the season, having lost to America’s Taylor Fritz in the final at Indian Wells.