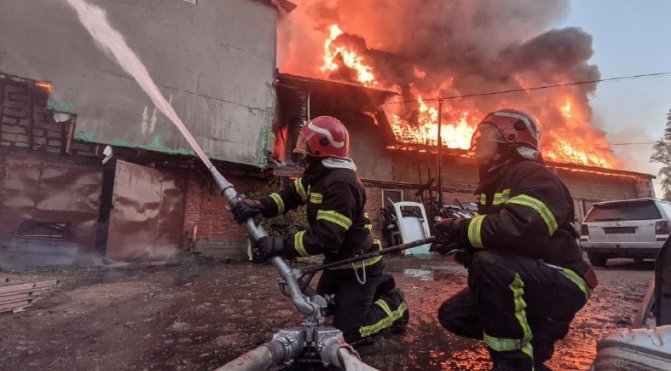 A HUGE fire broke out at a hotel in the Ukrainian capital city of Kyiv on Friday, May 6 which resulted in 98 people being evacuated according to local reports.

Fifteen firefighting units containing 80 crew members were dispatched to the scene of a huge blaze burning at a hotel in the Holosiivskyi district of Kyiv, the capital of Ukraine. The large fire broke out in the building located on Brodivska Street at around 4.30 am, according to a report by the Ukrainian emergency service unit, SES.

As a result of the fire, 5 people were seriously injured in the blaze as 98 people were evacuated.

According to the SES, the 2nd and 3rd floors of a three-storied building were burning when fire crews arrived as they tried to stop flames from spreading to the 1st floor.

After tackling the blaze for a couple of hours, the fire was deemed under control at 6.45 am and was fully extinguished at around 7.30 am.

The emergency service department noted that four buildings and an unfinished building nearby were saved.

YouTube footage from the scene shows the devastation caused by the war in Ukraine as the hotel crumbled next to burned-out cars visible on the war-torn streets.

The damage caused by the war is one of the main reasons for the introduction of a new global crowdfunding platform, according to Ukrainian President Volodymyr Zelensky – who was recently dubbed the “the Winston Churchill of our time” by former US President George Bush.

On Thursday, May 5, Mr Zelensky launched the United24 platform and revealed it was to raise money ‘to help Kyiv win the war with Russia’ and ‘rebuild the country’s infrastructure.’

“In one click, you can donate funds to protect our defenders, to save our civilians and to rebuild Ukraine,” Mr Zelensky said in English in a video on his Twitter page.

“All funds will be transferred to the national bank of Ukraine and allocated to the relevant ministries,” Zelensky said.

“Every donation matters for victory.”