BREAKING UPDATE: 2 dead and 19 injured after explosion in Spain’s Madrid 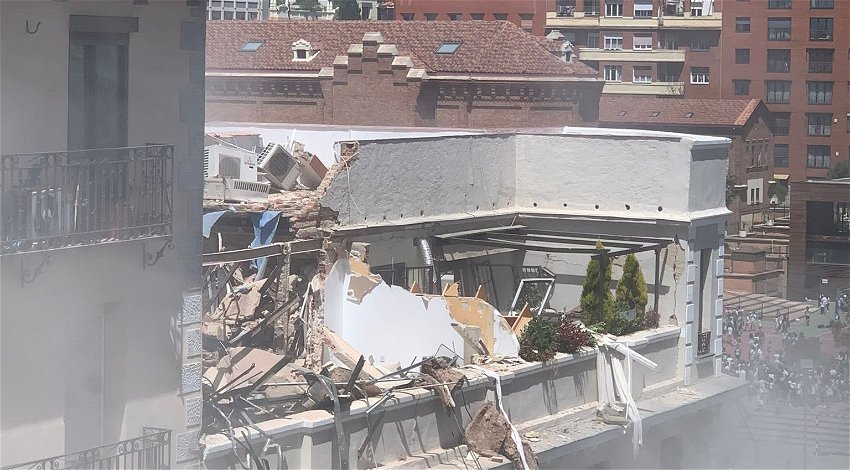 On Friday, May, 6, an explosion went off in the attic of a building located in the Salamanca district in the Centre of Madrid, Spain.

The explosion in Madrid went off shortly after 1.pm and caused damage to the building as well as an eviction of inhabitants of neighbouring buildings, as reported by 20minutos.

Two people have died with a further 19 injured. The fatalities were two builders aged 21 and 27,  who went missing after the explosion and Emergency services have since found their bodies.

“A few minutes ago @BomberosMad located the two missing workers, 21 and 27 years old, after the #explosion of the building in General Pardiñas with Ayala, sadly deceased. A psychologist from
@SAMUR_PC has assisted their families when they received the news.” read the update by Emergency Services Madrid.

Emergency Services said that they have treated 19 people, four of whom have been taken to hospital, one of them seriously injured, following an explosion in a house in the Salamanca district of Madrid. Firefighters are in the area working in the affected building where they are searching for possible victims.

The Emergency Services of Madrid have since updated their Twitter feed posting :

“#Explosion in Ayala Street.
@BomberosMad @SAMUR_PC y @policiademadrid
are already working in the area. Please avoid the area to facilitate the movement of #emergency vehicles.”

“Explosion in the neighbourhood of Salamanca, Madrid,” read a tweet posted by a user who was able to record footage of the aftermath of the explosion.

Credit: Twitter @pablocanadas
“Explosion in front of my house, Madrid, Goya,” read another tweet posted by a local neighbour who witnessed the explosion and its aftermath.

The explosion occurred at number 35 Calle General Pardiñas, near the junction with Hermosilla, Madrid, with the current cause believed to be a gas leak.

Susana Calderón, one of the owners of the restaurant Bartolomeo Kitchen, just opposite the building where the explosion occurred, stated: “The scare was horrible, we felt a gust of wind that shook everything.”

The street is currently blocked with debris and elements of the building. “All the cars parked down here have been smashed by the debris,” stated another witness.

Madrid City Council firefighters have arrived on the scene and are using ladders to access the flat, as well as national and municipal police and Samur-Protección Civil ambulance services, who have set up a field hospital.

The Municipal Police have cordoned off the area to keep curious by-standers away and to facilitate the work of the emergency teams.