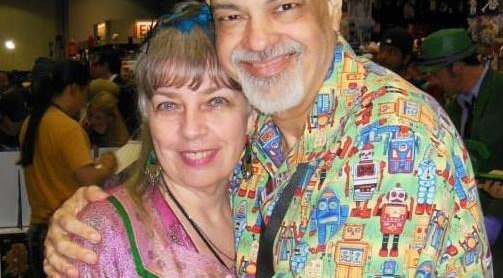 The legendary comic book artist George Pérez, whose work for DC and Marvel made him one of the most iconic comic book artists of his generation, died on Friday, May 6 after a battle with pancreatic cancer.

A statement on the 67-year-old’s Facebook page said: “George passed away yesterday, peacefully at home, with his wife of 490 months and family by his side. He was not in pain and knew he was very, very loved. We are all very much grieving but, at the same time, we are so incredibly grateful for the joy he brought to our lives. To know George was to love him, and he loved back. Fiercely and with his whole heart. The world is a lot less vibrant today without him in it.

“He loved all of you. He loved hearing your posts and seeing the drawings you sent and the tributes you made. He was deeply proud to have brought so much joy to so many.”

Pérez’s death was announced on Free Comic Book Day, a day his team said he “absolutely loved,” a year after he had announced that he had been diagnosed with stage 3 pancreatic cancer. At the time, he said he had been given just six months to live.

In the post announcing the diagnosis he said: “I have been given the option of chemotherapy and/or radiation therapy, but after weighing all the variables and assessing just how much of my remaining days would be eaten up by doctor visits, treatments, hospital stays and dealing with the often stressful and frustrating bureaucracy of the medical system, I’ve opted to just let nature take its course and I will enjoy whatever time I have left as fully as possible with my beautiful wife of over 40 years, my family, friends and my fans.”

Pérez became famous for his work on titles including The Avengers, Teen Titans, and the 1987 re-launch of Wonder Woman. He was also behind Crisis on Infinite Earths, a maxi series that celebrated DC’s 50th anniversary, and he designed the look for Lex Luthor battle suit in Action Comics.

DC Publisher and Chief Creative Officer Jim Lee said in a statement that he had left an “indelible mark on the world of comics” and influenced a “whole generation of creative talent.”

“George Pérez had an art style that was both dynamic and incredibly expressive,” “His art was the perfect storytelling canvas for some of the most important events in DC history. While he will be sorely missed, his work will live on with a countless number of fans, as well as all the talent he’s influenced over the years.”

DC Editor-in-Chief Marie Javins remembered Pérez as a “one-of-a-kind person that brought so much joy to the world, whilst Marvel Entertainment tweeted that Pérez’s “work paved seminal stories across comics, and his “legacy of kindness and generosity will never be forgotten.”

Other tributes have poured in for the legendary comic book artist George Pérez, as writers and artists shared memories and offered their condolences.