Spain set to see a week of unusually high temperatures 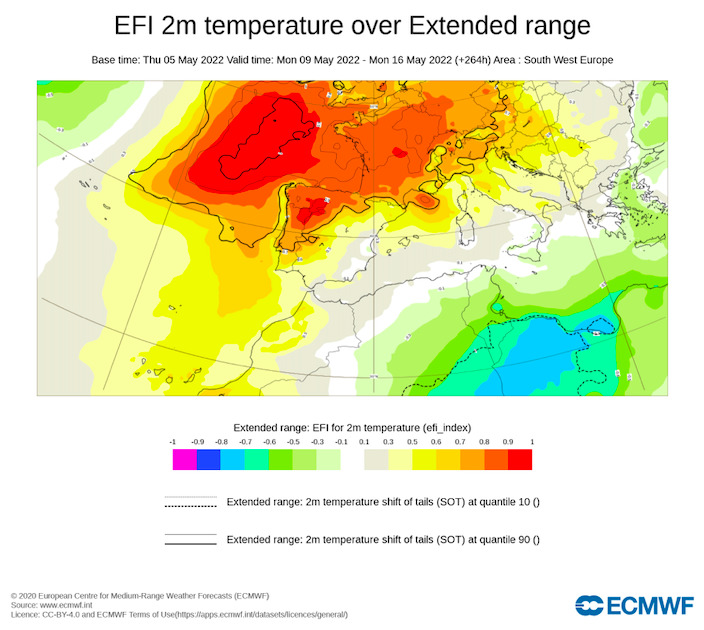 According to the State Meteorological Agency of Spain, the nation will see unusually high temperatures from May, 9, to May, 16.

“For the coming week (9-16 May), according to the ECMWF forecast maps, the #EFI index shows that temperatures will be very unusually high (>0.8) in the NW peninsular. In the Canaries they are expected to be unusually high (>0.5). +info:,” read a tweet posted by the State Meteorological Agency of Spain’s official twitter account.

“EFI index (shading) provides specialised forecast guidance for anomalous or extreme weather events by comparing the ENS forecast with the model climate for the chosen location, time of year and forecast lead time. ”

“The SOT index complements EFI by providing information about how extreme an extreme event might be.”

Thus by comparing Spain’s normal temperatures at this time of the year, the graph has warned of a potential heatwave that will hit in the coming week.

This announcement follows AEMET predicting May, June and July to see amongst the highest temperatures recorded in Spain over a  30 year period.

“Maximum temperatures rising on the Atlantic slope and, with more marked rises, on the Cantabrian slope. In the Mediterranean area, little change or slight decreases. In the Canary Islands, locally a notable rise, with temperatures exceeding 34 degrees Celsius in the eastern islands. ”

“Wind from the east in the Cantabrian Sea and Alborán. Levante with intervals of strong winds in the Strait of Gibraltar. In the Canary Islands, trade winds with strong intervals, tending to ease. Light variable winds in the rest of the Peninsula.”

“Maximum temperatures will predominantly rise, more significantly in the interior of the northern half of the peninsula, although in areas of Galicia and the western Cantabrian Sea a decrease is expected. ”

“Temperatures may exceed 34 degrees in the valleys of the Guadalquivir and Guadiana rivers and in the Canary Islands. Minimum temperatures will rise almost across the whole of Spain.”

“Light variable winds, more intense on the coasts, with a predominance of easterly and northerly components,  easterly in the Strait of Gibraltar with strong intervals. In the Ebro valley they will tend to be directed to the southeast.”