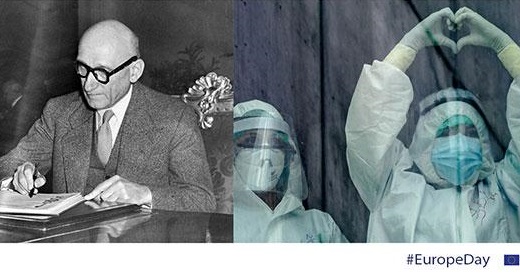 Today, May 9, is Europe Day, which marks the 72nd anniversary of the Schuman Declaration, the starting point for the European Union as we know it today.

The significance of Europe Day is even more relevant today, with the war in Ukraine threatening to spill over and once again bring the ravages of war to the continent.

In 1950, the nations of Europe were still struggling to overcome the devastation wrought by World War II, resulting in the Schuman Declaration being presented by French Foreign Minister Robert Schuman on May, 9 1950.

The declaration proposed the creation of a European Coal and Steel Community, whose members would pool coal and steel production.

It marks the 72nd anniversary of the Schuman Declaration, a starting point for the EU as we know it today.

Only through unity and solidarity are we able to maintain the European project. Together we are stronger. pic.twitter.com/T4Zqb1a2yZ

That resulted in the establishment of the ECSC with founding members France, West Germany, Italy, the Netherlands, Belgium and Luxembourg. That was the start of the setting up of the first of a series of supranational European institutions that would ultimately become today’s “European Union”.

These governments were determined to prevent another war, and rightly, or wrongly, they concluded that pooling coal and steel production would, in the words of the Declaration, make war between historic rivals France and Germany “not merely unthinkable, but materially impossible”.

The founding members also believed that merging economic interests would help raise standards of living and be the first step towards a more united Europe. Right from the outset, it was agreed that ECSC membership would be open to other countries on the continent.

The primary thinking behind the declaration remains valid today, with Russia’s invasion reinforcing the reasons behind the establishment of the bloc.

The Russian invasion of Ukraine reminds us why we are celebrating Europe Day tomorrow.

The day when a peaceful, prosperous Europe was born.

72 years later, Europe is united in solidarity with our Ukrainian friends, who aspire to a future of freedom.

Europe Day will mean many things to people across the continent, with its celebrations in stark contrast to those taking place in Russia, where the military takes centre stage. But whatever it means to you, it should not be forgotten that Europe was established to stop countries on the continent from raging war against its neighbours, giving the bloc its longest period of peace in modern times.