Shocking discovery of 44 civilian bodies in the rubble of destroyed building in Izyum, Ukraine 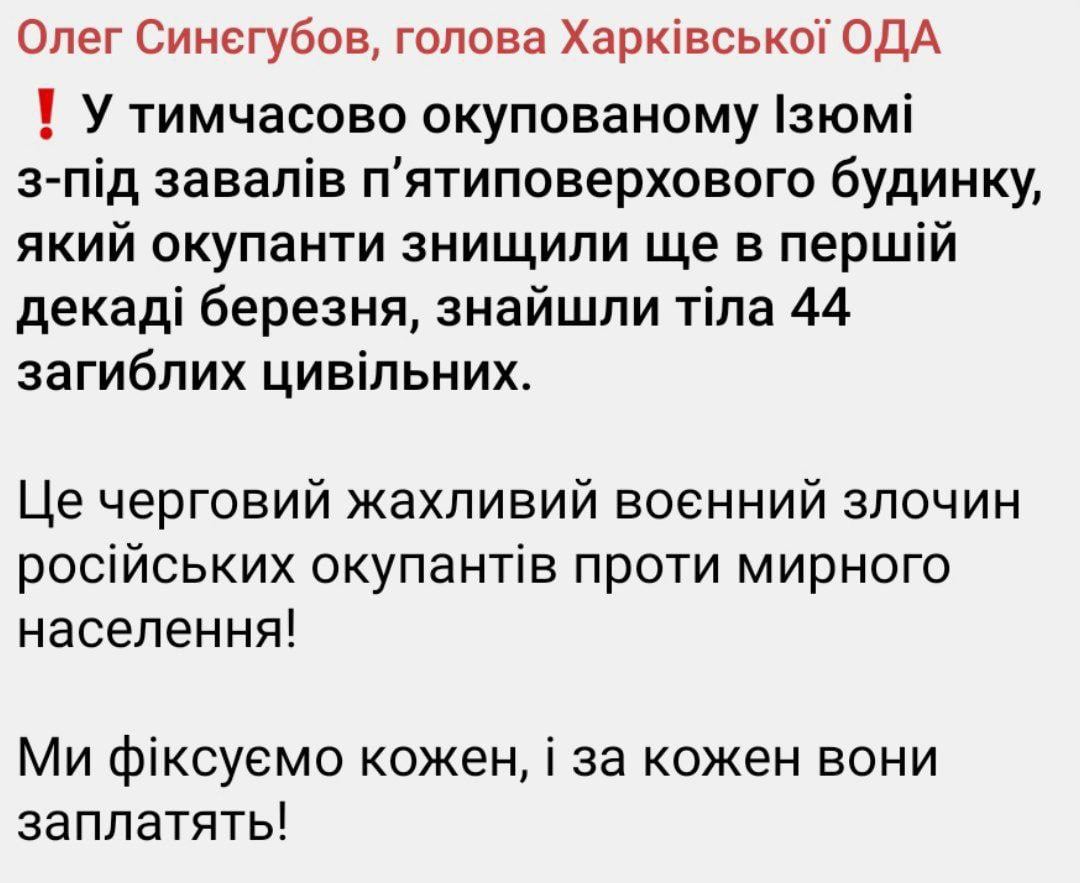 Shocking discovery of 44 civilian bodies in the rubble of destroyed building in Izyum, Ukraine. Image: Telegram

A UKRAINE official has announced on Tuesday, May 10 that the bodies of 44 civilians have been discovered buried in the rubble of a building in Izyum, which was destroyed by Russian forces in March.

According to the head of the Ukraine’s Kharkiv regional state administration, 44 dead bodies of civilians have been found in the rubble of a five-story building in the Ukrainian city of Izyum, which was destroyed during Russian attacks back in March.

The announcement of the discovery was made by Oleg Siniegubov, the head of the Kharkiv regional administration, on the messaging site Telegram.

“This is one of the worst war crimes of the Russian occupants against the civilian population!” he wrote alongside the announcement of the number of bodies found.

He added: “We will fix each one, and they will pay for each one!”

Izyum, in the war-torn region of Kharkiv, western Ukraine, was also where popular Ukrainian journalist Oleksandr (Alexander) Makhov was killed.

Ukrainian President Volodymyr Zelensky paid tribute to the 36-year-old via his nightly address at the time.

“Today I will start with a story about one person. About Oleksandr Makhov – a well-known journalist,” he said during his nightly on Wednesday, Wednesday, May 4.

“I’m sure you’ve seen his reports on Ukraine and Dom TV channels. You may have seen his comments, his posts. He has always been like that – with his own position. Patriotic and sincere. And always without vanity. And he was always among the bravest, among the first.

He added: “In 2017, he was the first Ukrainian journalist to visit our station in Antarctica. When COVID came, he was not afraid. He has lived in Sanzhary for two weeks, where Ukrainians were brought to from China. From the first day of the full-scale war, he was on the frontline. Volunteer. ATO veteran. Warrior of the 95th assault brigade.

“Born in the Luhansk region. He had a special feeling of what this war means.”

“Today he died in the Kharkiv region, in the battles near Izium. He was 36 years old. My sincere condolences to relatives and friends. Let his son Vladyslav know: Russia will bear responsibility for this death. We will definitely gain victory for Ukraine. I’m sure it was Oleksandr’s dream. And we will make it come true,” he continued.

“Eternal memory to him and to all our heroes who gave lives for Ukraine!”

Russians killed another person I knew, another journalist. I met Oleksandr Makhov in Sloviansk several years ago. He was one of the best Ukrainian war reporters. He joined the army after Russian full-scale invasion and was killed in combat near Izium. He was so young. RIP pic.twitter.com/tUxa2h0Un7