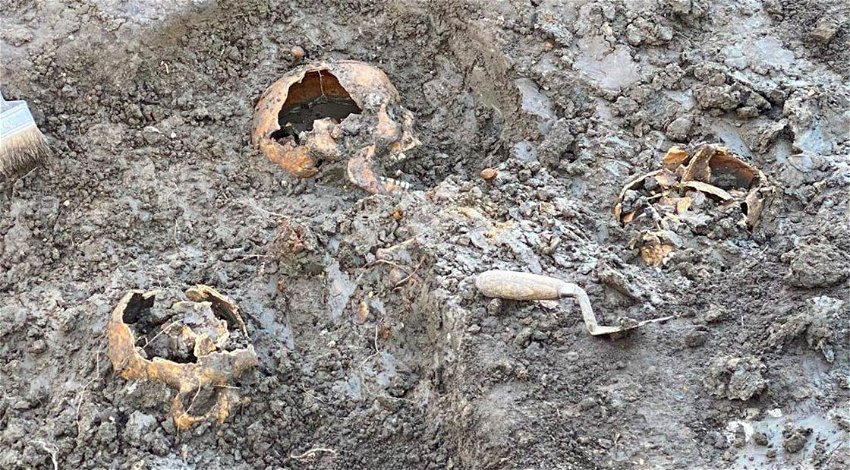 Workers carrying out excavations outside the old city walls of Vienan, near Uthrecht in the Netherlands, were surprised to find a mass grave, the skeletons having now been identified by forensic anthropologists as British soldiers.

The mass grave of over 82 skeletons was uncovered in November 2020, but only now made public with the work carried out by the forensic anthropologists called to the site, now complete.

They concluded that all but four of the men, in the grave, were from Southern England and were most likely teenagers or young adults.

Researcher April Pijpelink told the BBC: “At first we thought these men died of injuries in battle.

“But during my research, it became clear that around 8 per cent of them suffered from one or more infections, while basically all their trauma wounds had healed.”

That would suggest these were not soldiers who died in battle but who died from another cause.

Hans Veenstra, an Archaeologist, told RTV Utrecht that he thinks the soldiers ended up in Vianen by chance. According to Veenstra there one was a field hospital in the location where the skeletons were found.

He thinks it is possible that the men were probably part of coalition forces fighting the French during the Revolutionary Wars of 1793–1795.

He said: “History is full of writing about the elite, people with power, money and status, but you don’t often hear about the ordinary man.

“These youngsters are still anonymous, but they do fill a gap in a forgotten piece of history.”

Finding the mass grave of British soldiers, has, according to archaeologists and anthropologists, provided some insight into what might have happened during that period with little literature to go on.

Mass graves, such as this one with British soldiers in the Netherlands, provides the missing blocks in archaeologists, anthropologists and historians understanding of what happened during that period, with most literature concentrating on those with rank and the aristocracy.