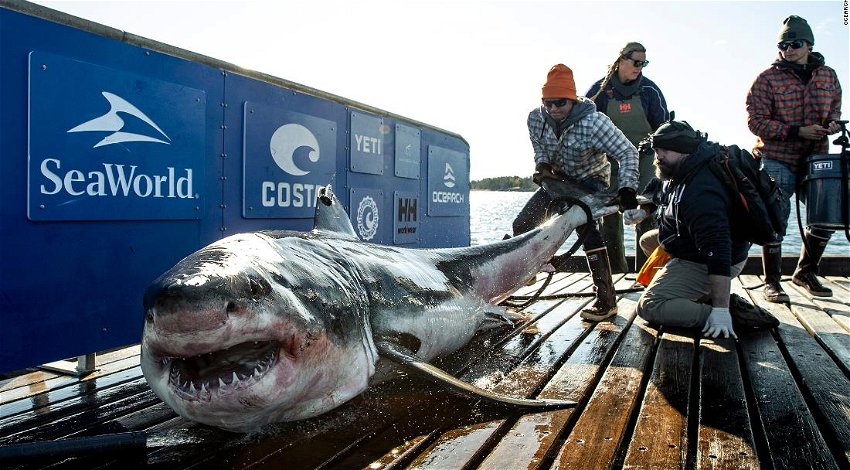 On Tuesday, May, 10, a 12 foot great white shark was spotted off the coast of New Jersey reportedly weighing a whopping 998 pounds.

The great white shark was SPOT-tagged in the Northwest Atlantic Ocean by OCEARCH, a nonprofit marine research group that issues data on shark migration.

According to the official OCEARCH website, Ironbound, named after West Ironbound Island near Lunenburg, Nova Scotia, the great white shark is 12 feet, 4 inches long,  and weighs an impressive 998 pounds.

After being tagged by OCEARCH, a “ping” happens when an animal tag breaks the surface of the water, sending data to their database. A  “Z-Ping” is a ping that provides no location on where the shark is despite having broken the water surface.
The great white shark’s latest ping was on Tuesday,May, 10, at 12.12am with a follow up Z-ping on the same day at 1.10.am, in close proximity to the coast of New Jersey, US.
“When we tagged him, he was impressive,” stated OCEARCH Chief Scientist Bob Hueter in an interview with CNN.
Hueter went on to speak of the current movements of the great white sharks :”They’re moving north to the very rich feeding grounds off of Canada and the northeastern US.”
It is believed that Ironbound the great white shark, will spend the summer months in Nova Scotia’s northern waters before heading back to Florida.
“The migration is an adaptation, of course, to seasonal temperature fluxes, to where the food is,” Hueter stated.
“Mating season is over, we think, and Ironbound is on his way north to get into some good feeding ground and bulk up again for the next year,” Hueter said.