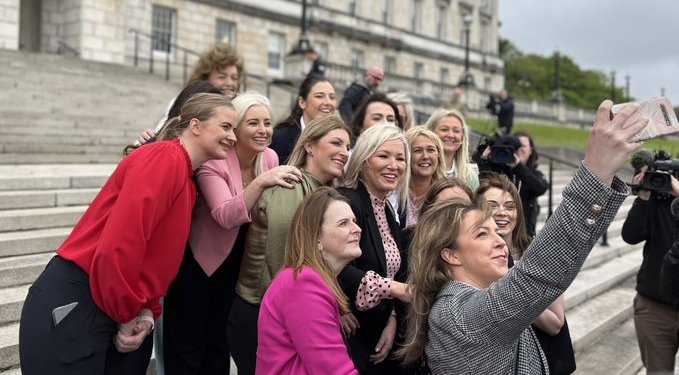 The Democratic Unionist Party (DUP) refuses to return to government after the recent elections that saw Sinn Féin become the largest party, in a protest over the Northern Ireland EU border arrangements agreed after Brexit.

Talks are ongoing between the unionist party, other political parties in Northern Ireland and the UK government to try and get them to return to government.

For some time now, the DUP has protested against the Northern Ireland Protocol, part of the UK’s Brexit deal with the European Union. That deal maintains free across the Irish border, but at the expense of a border between Britain and the island.

The deal has created issues for those moving goods across the Irish Sea and in particular British retailers, but the DUP also believe that it undermines the region’s place in the UK.

Would-be First Minister Michelle O’Neill of Sinn Féin has said there could be no attempt by the DUP to “punish the public”.

Brandon Lewis, the Secretary of State for Northern Ireland, has urged the party leaders to respect the outcome of the election on Thursday and re-establish Stormont as soon as possible.

He said the government is working to address the issues relating to the protocol and that they will “continue to press the EU to agree the crucial changes that are urgently needed”.

The elections resulted in Sinn Féin winning the most seats, providing them with a historic opportunity to nominate the first nationalist Northern Ireland First Minister in the region’s history. However, that is reliant on DUP support and their taking up of the deputy first minister post.

In terms of the Good Friday Agreement, the roles for a joint office with equal responsibility, however the allocation of roles is symbolically important.

Sir Jeffrey Donaldson has however said that his party would not nominate ministers until there had been “decisive action” on the protocol.

He said: “They (UK government) gave a firm commitment to protect our place in the UK internal market.

“They have not done so, they have failed over the last two-and-a-half years to honour that commitment.”

But O’Neill said the DUP and the UK government must respect the election’s outcome.

She said: “Brinkmanship will not be tolerated where the north of Ireland becomes collateral damage in a game of chicken with the European Commission.

“Make no mistake, we and our business community here will not be held to ransom.”

The first sitting of the new assembly is due to take place on Friday, but as the DUP refuses to return in a Brexit protest, the country will once again find itself in the position where its vote has counted for little.