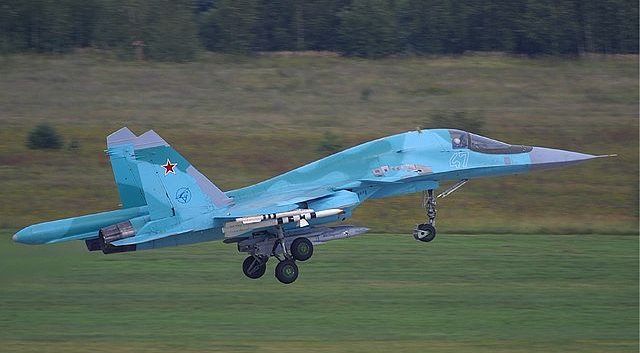 The UK’s Defence Minister, speaking at the National Army Museum on Tuesday, May 10, claimed that Russian fighter jets shot down are being found with basic GPS receivers “taped to the dashboards” affecting their ability to find targets.

Commemorating those who died in World War II he said that the war was both “senseless and self-defeating.”

Referring to the difficulties Russia was experiencing in winning the war, he said that there was evidence their military hardware was being pushed to breaking point by the invasion of Ukraine.

“‘GPS’ receivers have been found taped to the dashboards of downed Russian Su-34s, so the pilots knew where they were, due to the poor quality of their own systems.

“The result is that whilst Russia have large amounts of artillery and armour that they like parading, they are unable to leverage them for combined arms manoeuvre and just resort to mass indiscriminate barrages.”

By all accounts much of the technology in use is outdated, with the Su-34 first manufactured during the Soviet Union in the early 1990s, but is still one of Russia’s leading fighter jets.

Wallace added that Russian vehicles: “Are frequently found with 1980s paper maps of Ukraine in them” and that soldiers are using “pine logs as makeshift protection on logistical trucks” and attaching “overhead ‘cope cages’ to their tanks.”

Ukraine has made similar claims sharing evidence of Russian attempts to keep old and outdated equipment running, with images of drones covered in duct tape and fitted with a generic plastic bottle tops for fuel caps and discarded bandages dated 1978.

Similarly, Moscow cancelled the Victory Day flyby due to bad weather on Monday, suggesting that the equipment is maybe not what it is said to be.

If indeed Russian jets are using basic GPS units taped to their dashboards, it would provide insight into what has at times been indiscriminate bombing.