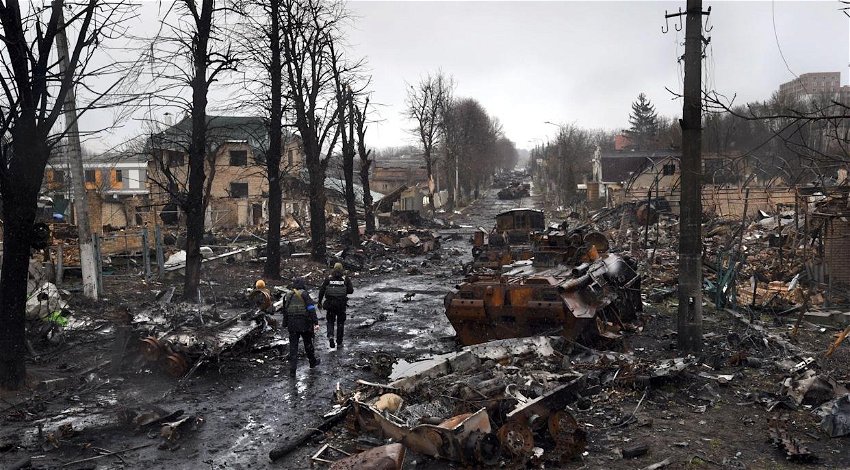 The government in Ukraine has claimed that Russia is refusing to accept the return of the bodies of deceased soldiers, however sources within Russia have denied the claims.

The authorities in Ukraine are doing what they can to clean up, which includes collecting bodies of the deceased, whether Ukrainian or Russian.

But while they are able to deal with their own deceased, Ukraine is waiting on Russia to collect its own and to afford those that died in their service to be given a suitable burial.

But reporters on the ground and the UK’s Channel 4, say that isn’t happening, posting pictures of body piles and refrigerator facilities packed to the ceiling with bodies.

While russia parades on Red Square, thousands of its dead soldiers are stacked in bags in refrigerator trains 🇺🇦, @AJEnglish reports. russians refuse to take them, so #Ukraine might even have to bury them at our own cost. #RussianWarCrimes #Kyiv pic.twitter.com/rbVrZuI8de

Russia, who celebrated Victory Day this week with a grand parade, have continuously denied reports of mass casualties. Instead, the Kremlin have continued to hold the line that the “special operation” is going well and to plan.

According to Common Weal Magazine, “Vladimir Putin’s political interests are served by keeping the body count a secret and suppressing evidence of Russian losses. A stream of corpses returning to the villages and towns of the Russian Federation would falsify his preferred narrative of a swift and successful “special military operation.”

No one is exactly sure of the number of casualties, with NATO estimating on March 24 between seven and fifteen thousand Russian soldiers had lost their lives. Russia’s defence ministry has however only admitted to 1,351 deaths, a stark difference between the two. Whatever the number is, what is clear is that as the war continues the number of those who have lost their life will increase.

However, the evidence tells a different story, as Russia refuses to accept the return of its deceased soldiers whilst wives, girlfriends and parents wait for news of their loved ones.