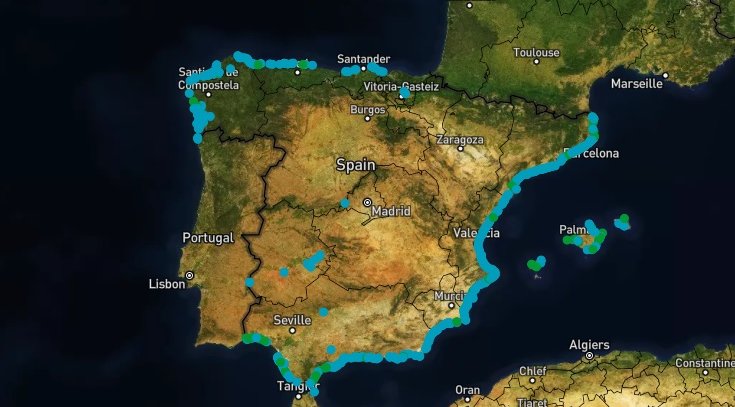 Spain has maintained its top spot worldwide, a position it has held since 1994 along with Greece and Turkey, with 729 blue flags awarded to beaches, marinas and boats across the country.

Fernando Valdés, Secretary of State for Tourism, said that blue flags are good for tourism, with 250 municipalities making the grade. He continued, saying that the government had invested 150 million euros in 2021 in upgrading and promoting beaches and that the number of blue flags was testament to the value of the investment.

The organisation is paying special attention to inland beaches as the popularity of these grows.

As in previous years, the Valencian Community maintained its top spot rising to 139 beaches that make the grade. Four of these achieved the standard for the first time.

The number of ports recognised rose from 16 to 19.

Andalusia saw the greatest improvement, increasing the number of blue flag beaches by seven. A number of those beaches were singled out for special mention for inclusivity, including Benalmádena, Málaga and Chiclana de la Frontera.

Other specific mentions were for Catalonia’s environmental education in Badalona, Galicia’s for the municipality of the Lugo navy.

Murcia was also singled out for its environmental education in Cartagena.

In the following document, you can consult the list of blue flags by province and their variation compared to 2021.

Valdés finished off his speech by saying Spain is not only “regaining world leadership” but it was on its way “to becoming more sustainable, more technological and more profitable thanks to European funds.”

He concluded:  “We can say loudly that we have the best quality beaches and the best prepared ones.”

As Spain’s tourism sector recovers, the 729 blue flags will go a long way to the country becoming one of the top destinations in the world again.