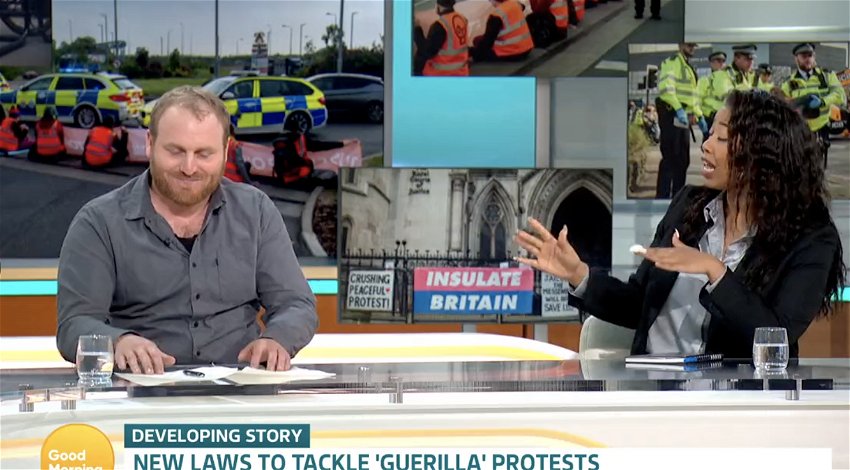 GOOD MORNING BRITAIN (GMB) presenter Susanna Reid was left stunned after an Insulate Britain spokesperson this morning told her he had made no efforts to insulate his own home.

Interviewed by Richard Madeley and Susanna Reid on Wednesday, May 11, protestor Liam Norton, who was previously accused of hypocrisy for not insulating his home in a previous GMB appearance, admitted that he had still not yet even approached the landlord who owns his home about insulating it.

Norton, who helps to organise protests to push the government to ensure that every UK home is insulated, claimed he was unable to insulate his home as he has high energy bills and is living in poverty.

He also told Reid he did not own his own home.

Pushing him on the subject, the presenter asked Norton if he had contacted his landlord to ask if they were prepared to insulate the home he lived in.

Norton said: “At the moment I haven´t asked my landlord that question.”

A stunned Susanna Reid asked why, before the protestor replied: “It´s not my place to demand that people insulate their homes.”

Insulate Britain have caused traffic and travel chaos across England since launching their campaign last year to push the government to provide funding for all homes to be insulated.

While many have agreed with the group’s message that uninsulated homes are contributing to global warming, a large number of Brits have said they do not agree with the tactics the protestors employ and argue that it has turned many against their cause.

During the same interview, Mr Norton was also pressed on his thoughts on new laws being introduced to tackle protestors that cause disturbances, which will allow police to have more power.

Mr Norton dared police to get tough and called the new laws “pointless.”

“These new laws are a waste of time – we will continue to make noise and protest until we are heard,” he said.

“Go ahead and get tough but it is pointless. We need to be extreme otherwise nobody will listen to our message.”

Asked by Ms Reid what would stop the protests, the Insulate Britain spokesman said: “We need a meaningful statement from the government that they will stop the granting of 41 new oil and gas licences and we’ve been asking for a policy to insulate Britain.”