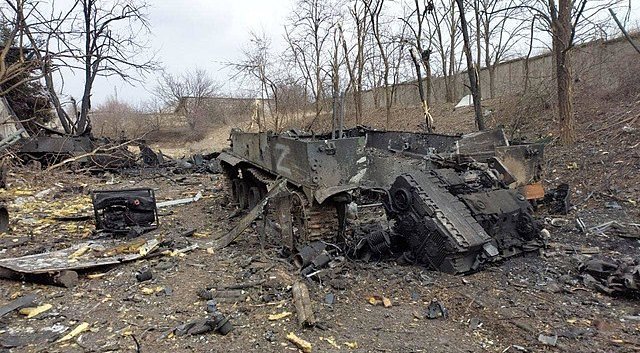 The Kremlin continues to deny that sanctions are having the desired effect, however the evidence on the ground would suggest otherwise with Russian tanks found to be using domestic appliance chips due to supply shortages.

Russia, like many countries in the world, had become increasingly reliant on components from outside the country, especially items like computer chips which are manufactured in only a few places.

That is, according to a US official who spoke to Business Insider, affecting Russia’s ability to produce sophisticated equipment. He indicated that according to their intelligence, Russia is being forced to use computer chips destined for home appliances to repair their military hardware.

Gina Raimondo, Commerce Secretary, told the Senate Appropriations Committee on Wednesday, May 11, that: “We have reports from Ukrainians that when they find abandoned or destroyed Russian military equipment, it’s full of semiconductors that they took out of dishwashers and refrigerators.”

She continued, saying that US technology exports to Russia fell by at least 70% due to sanctions; “Our approach was to deny Russia technology, technology that would cripple their ability to continue a military operation. And that is exactly what we are doing.”

According to a White House statement: “Russia is struggling to replenish its weapons and military equipment. Russia’s two main tank plants, Uralvagonzavod Corporation and Chelyabinsk Tractor Plant, have stopped work due to a lack of foreign components.”

The state of Russian equipment has been well documented by Ukrainian forces, with this news just the latest in a long line of stories that show their military ware to be substandard.

Reports include airplanes with standard GPS units taped to dashboards, drones held together with duct tape and bottle caps used for fuel covers.

If indeed reports that Russian tanks are using domestic appliance chips in their tanks are true, this would explain some of the difficulties their troops have experienced on the front line. It would also suggest that shortages of some items are begging to have a major effect on the economy as a whole.