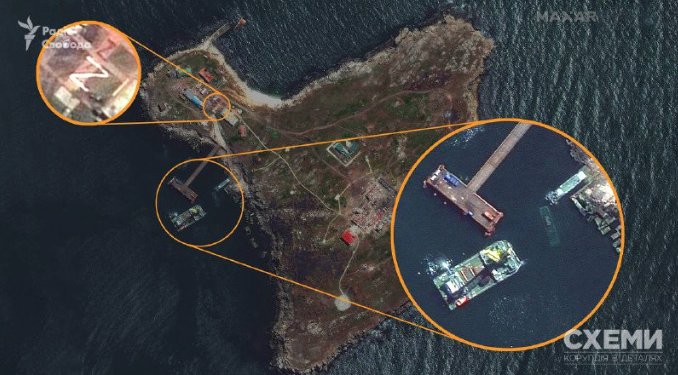 SATELLITE images reportedly show a Z pattern etched on Snake ‘Zmiyiny’ Island – the symbol of war Russia has used since they invaded Ukraine on February 24.

A Maxar satellite detected a lithium “Z” on Snake Island – 185 miles west of Sevastopol – while a crane was also spotted trying to retrieve a wrecked Serna landing boat.

As reported by Shemi (Radio Liberty) on May 12, the image shows a large letter “Z” marked on the northeastern part of the island.

Recently, the dead bodies of four dead Russian soldiers were lined up as part of the Z pattern on the outskirts of the war-torn city of Kharkiv, which has been described as an ‘open-air morgue’ by journalists in Ukraine.

The satellite also detected a sunken Serna type boat with a floating crane next to it. It is believed that the ship was sunk by the Ukrainian pilotless aircraft carrier Bayraktar on May 7.

According to the Daily Mail’s Richard Pendlebury, the battle for Snake Island could determine the outcome of the war.

“Snake Island is the crucible of this conflict; a 46-acre anvil upon which Ukraine’s air and missile forces are currently attempting to break Russian military power in the north-west of the Black Sea,” he said.

“Much is at stake. If all had gone according to Russian plan, the island would be an impregnable staging post for offensive operations against the region around Odessa — Ukraine’s biggest and only major port not to have fallen.

He added: “If sophisticated radar and missile platforms were established on the island they would dominate air, land and sea for hundreds of miles.”

On Thursday, May 12, Ukraine claimed that another Russian naval vessel, the logistics support ship Vsevolod Bobrov, was on fire in the vicinity of Snake Island.

Prior to this, on February 25, it was reported that all 13 soldiers defending the island were killed after refusing to surrender it to a Russian warship in the Black Sea.

At the time, Ukrainian President Volodymyr Zelenskyy said he would honour the deceased guards posthumously with the title “Hero of Ukraine.”

“May the memory of those who gave their lives for Ukraine live forever,” he said.

However, days later it was discovered that the soldiers were alive but had been captured.

They were later freed and allowed to go home to Cherkasy, in central Ukraine.

After being freed, Ukraine awarded a medal of bravery to Roman Hrybov, the soldier who told a Russian warship to ‘go f*** yourself’ before the Snake Island he was defending was attacked.

Audio released at the time described a Russian warship approaching the island and asking the border guards to “surrender to avoid bloodshed and unnecessary victims, otherwise, you’ll be bombed.”