227 children killed and 420 wounded in Ukraine, war crimes being investigated 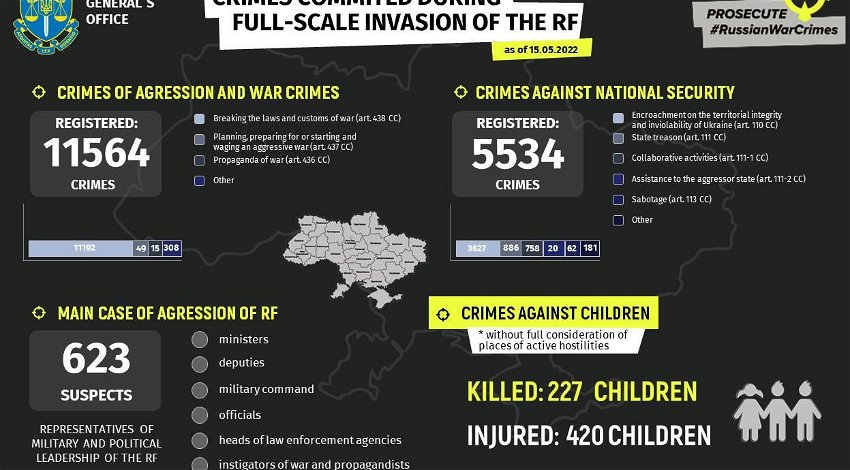 THE Prosecutor General’s Office in Ukraine has revealed that 227 children have been killed and more than 420 wounded in the country as a result of the conflict with Russia.

The tragic number of children’s deaths in Ukraine is being collected by Iryna Venediktova as part of continued investigations into alleged war crimes and genocide of Ukrainian civilians at the hands of Putin’s army.

Statistics as of Sunday, May 15, show that 11280 cases of war crimes are being investigated by the Ukrainian government and more than 5 thousand cases related to them (5534).

The data aslo revealed that 623 suspects are being looked at for potential war crimes.

Iryna Venediktova confirmed on Friday, May 13, that Ukraine had “over 11000 ongoing cases of war crimes and already 40 suspects.”

She said she is “confident that in the nearest future we will see other cases being transferred to courts and perpetrators appearing before judges. We will ensure that these cases are brought to their logical end.”

She added: “More than 50,000 interrogations have already been conducted in the former – both victims and witnesses, including evacuees and refugees at border checkpoints, as well as exchanged Ukrainian prisoners of war.”

As a result of the investigations, the first trial of a Russian soldier – accused of killing a man from the Sumy Region – started in Kyiv’s Solomenskyy district court on Friday, May 13.

According to Venediktova, the commander of the 4th Tank Kantemirovskaya Division of the Moscow Region’s military unit 32010 has been accused of war crimes including premeditated murder – part 2 of article 438 of the Criminal Code of Ukraine – after allegedly killing a 62-year-old Ukrainian civilian.