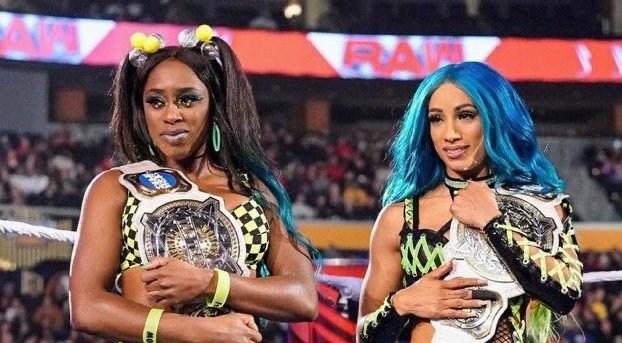 WWE women’s tag team champions Sasha Banks and Naomi both walked out during the middle of Monday night RAW due to ‘creative differences’, according to reports on Tuesday, May 17.

Tag champions Sasha Banks and Naomi both walked out of the live WWE show on Monday, May 16 despite being told they were in the main event of the show.

Due to apparent ‘disrespect’, the pair reportedly handed back their title belts and left the Scope Arena in Norfolk, Virginia.

Following the incident, WWE were forced to release a statement after the script of the show had to be changed.

“When Sasha Banks and Naomi arrived at the arena this afternoon, they were informed of their participation in the main event of tonight’s Monday Night Raw,” the statement read.

“During the broadcast, they walked into WWE Head of Talent Relations John Laurinaitis’ office with their suitcases in hand, placed their tag team championship belts on his desk and walked out.

It continued: “Monday Night Raw is a scripted live TV show, whose characters are expected to perform the requirements of their contract.

According to Fightful’s Sean Ross Sapp, the two opponents that they allegedly felt ‘uncomfortable in the ring with’ were most likely Irish born wrestler Becky Lynch, and Asuka, although other internet rumours suggest that it was Nikki A.S.H. and Scottish star ‘Doudrop’.

Despite Banks and Naomi walking out, the show went on and the main was changed to a one-on-one matchup between the aforementioned Asuka and Lynch, which Asuka won.

As a result of her victory, the Japanese star earned a RAW Women’s Title match against Bianca Belair at the upcoming Hell in a Cell event on June 6.

“I Stand With Sasha Banks and Naomi,” one person wrote.

Another person said: “It’s crazy that WWE would think fans would side with them here. Good for Sasha and Naomi. I stand with them 100%”

“Sadly, I don’t just get to leave work if I don’t like what they have planned for me today. Be professional. Not the first time for Sasha,” another wrote.