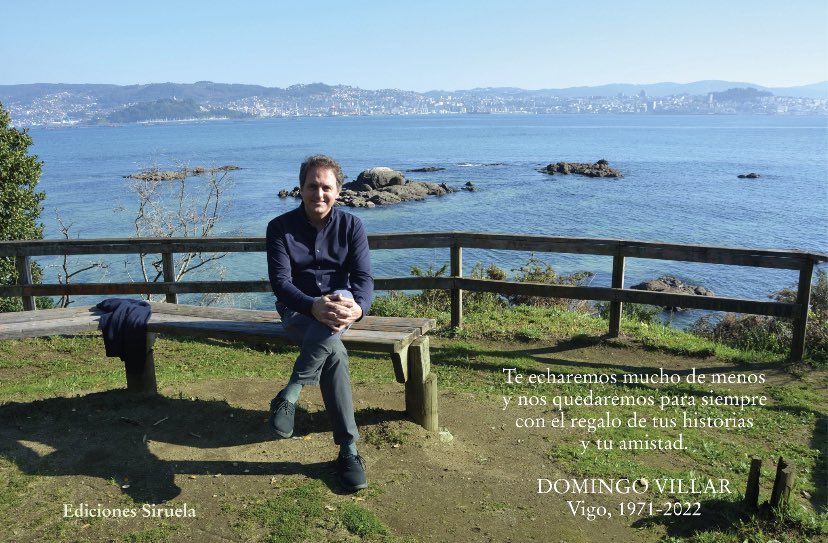 DOMINGO VILLAR, the Spanish writer who penned the ‘Inspector Leo Caldas’ crime novels, has died after being placed in a coma at Cunqueiro Hospital, in Spain’s northwest coast city of Vigo on Monday, May 16.

Known as one of the most recognised Galician writers, Domingo Villar sadly passed away on Wednesday, May 18 after spending a couple of nights in ICU following a stroke.

Villar burst onto the Spanish book scene in 2006 with ‘Ojos de agua’, which followed the character of Inspector Leo Caldas.

It took ten years for another book, but in 2019, fans were treated to the long-awaited return of Domingo Villar, who released ‘The Last Ship’ – which concluded the Inspector Leo Caldas series.

The series has been translated into more than 15 languages and has won a large number of awards, including the Novelpol award on two occasions, the Antón Losada Diéguez, the Sintagma Award, the Brigada 21 Award, the Frei Martín Sarmiento Award, Book of the Year from the Federation of Galician Booksellers.

Villar was also a finalist in the UK’s Crime Thriller Awards, the Le Point du Polar Européen prize in France and the Martin Beck prize of the Swedish Academy of Crime Novels.

Iván Ferreiro shared a touching tribute to his friend, writing: “Domingo Villar has left today. When we were children I was in my sister’s class, but growing up we met at night. I remember having some wonderful and interesting talks. Two guys growing up and analysing life.

“We established a relationship of friendship and respect in which we looked for each other to chat while the others drank or danced. He was a sensitive and intelligent person who was interested in knowing how the rest of us thought and felt,” he said.

“The last time I saw him was walking into a restaurant. We hadn’t seen each other in a long time and I was distracted with my shit. We said “hello” to each other and I, who am a empanada, did not realise it was him. This happens to me a lot, I’m the worst.

He continued: “I realised when he left the restaurant and I wanted to chat with him. I would have liked to tell him that I had read some of his books and that I thought they were wonderful. Also that I remembered him and his talks many times.

“Tell him that those youth talks have made me who I am and that now, as an adult, I realise how important they were in my formation as a musician and as a person.

“Tell him that I find it amazing that we both managed to dedicate ourselves to creative things being two freaks from Vigo. In short, I feel enormous sadness and I send all my love to all those who love him, who are a multitude. What a great pity.”

“In memory of Domingo Villar: I, like the sea, he did not want to die,” one person said.

Another person said: “What moves me the most about the sad death of Domingo Villar is how everyone who knew him remembers him as a beautiful person. I think that’s the important thing, beyond the great writer he was and the works he leaves us, the memory of a beautiful person remains.”

“Domingo Villar dies. A good man is leaving. I am devastated with grief, and I can’t stop thinking about his family. My tribute will be to his magnificent literary work. Join me in reading and rereading his books. In them we will meet again. It has been an honor to meet you,” said another Twitter user.

Another person wrote: “Domingo Villar has just died on his land, to which he returned to take care of his mother. Thus begins and thus ends “The Last Boat”, his latest novel. In the Eligio today there is a toast to him.”

Author María Dueñas wrote: “It is a great shame to know that Domingo Villar has died. I enjoyed his novels, I fell in love with Leo Caldas and I loved sharing a Book Fair with him. My condolences to yours. Rest in peace.”

“Domingo Villar, Mincho, was a genius, a teacher, not only of words. Their departure leaves us without them…how unfair life is sometimes. All my love for his family, friends and the people who loved and appreciated him. We are already missing it,” wrote another person.

The Orgullo Galego Twitter account said: “Domingo Villar, one of the most important writers in the Galician language and author of classics that are already part of our history, dies at the age of 51.

“Gazas for your contribution to the Galician language and literature, you have reached the library and the hearts of Galicians.”