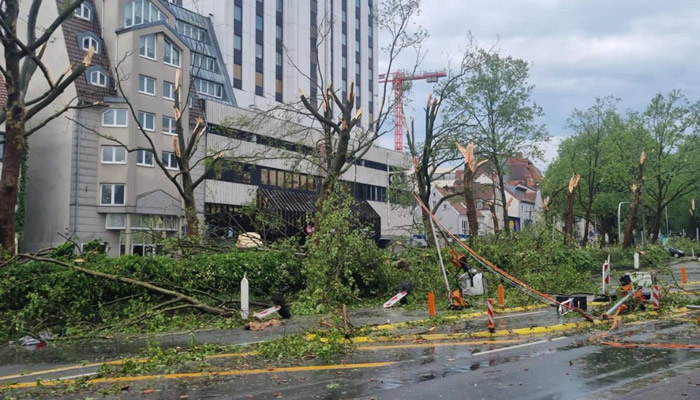 Photo of destruction caused by the tornado in Germany. Credit: [email protected]_11x

Dozens of people reported injured, 13 seriously, after a freak triple-tornado ripped through a German city.

German meteorologists had forecast strong winds of around 80mph with rain and hail for Friday, May 20, but they never expected the freak triple-tornado that ripped through parts of the North Rhine-Westphalia region.

According to reports from the DPA news agency, at least 13 people were seriously injured, with dozens more hurt. Three tornados were generated by the freak storm which reportedly ‘snapped trees like matches’ in the western state of central Germany. Images on social media showed vehicles overturned.

Local authorities in North Rhine-Westphalia had warned people to stay indoors as the storm hit Paderborn, in nearby Lippstadt, on the edge of the town of Hoexter.

Michael Dreier, the mayor of Paderborn said that 43 people had been injured. He told how buildings had their roofs ripped off and windows were blown out. A trail of destruction around 300 metres wide was left behind by the tornados.

Firefighters en route to an incident reportedly had the windscreen of their fire appliance hit by a flying tree, but its occupants were unhurt, as reported by dailymail.co.uk.

Another 14 people were injured just south of the city of Nuremberg as storms also hit the region of Bavaria. The tourists were sheltering at Lake Brombach inside a wooden hut, approximately 85m² in size,  when the wind totally collapsed it. A 37-year-old woman was reportedly airlifted to hospital in a serious condition.

Yesterday, a #tornado ravaged in the city of #Paderborn , North Rhine Westphalia, Germany. Here are some videos and photos of the havoc and the aftermath thereof.

You still believe climate change is a hoax, Karen? https://t.co/VSGw1PoeSW