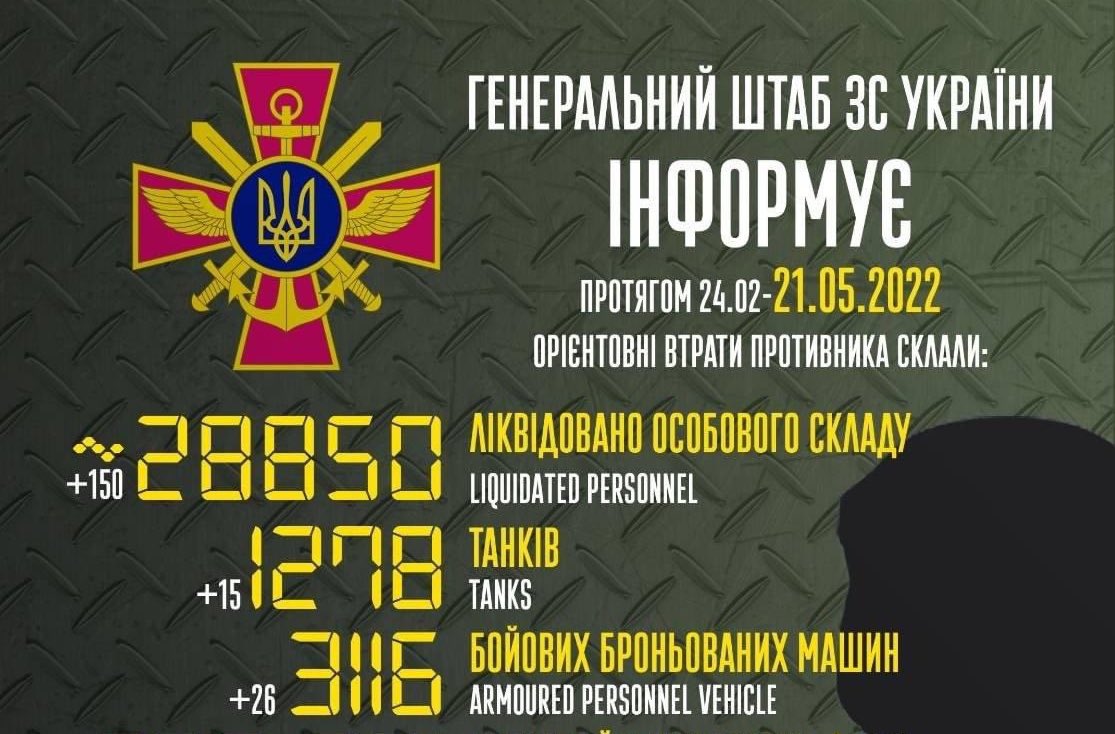 ON Saturday, May, 21, Ukraine’s Ministry of Defence published updated figures of combat losses inflicted on Russian forces since the beginning of the war.

Another 26 Russian forces Armoured Personnel Carriers (APCs) were destroyed by Ukrainian forces on Friday, May 20, according to Ukraine’s military update on Russia’s combat losses since February 24.

Around 150 more soldiers from Russia were killed by Ukrainian forces, which saw the number of Russian soldiers that have lost their lives fighting in the conflict rise to around 28,850, according to Ukraine’s MoD.

The other significant increase in figures is the loss of tanks, which has risen by 15. This takes the number of Russian tanks destroyed by the Ukrainian army to 1278.

The General Staff of the Armed Forces of Ukraine revealed that Putin’s army had suffered the greatest losses on Friday, May 20 in the Bakhmutsky region – for the second day in a row.

A detailed breakdown of the 87th day of the war also shows that the loss of the 26 Russian APCs now means Ukraine has destroyed 3116 in total since the beginning of the conflict, while the destruction of 16 more vehicles and fuel tanks means that Russia has lost 2178 in total.

Ukraine also reported that they had destroyed one helicopter.

Despite the increase in Russian losses, a missile strike against Ukraine destroyed a cultural building in Lozova, Kharkiv Oblast and reportedly injured seven people.

Although, the strike could well have been out of desperation after Putin has reportedly grown tired of failures in Ukraine.

As a result, two of Putin’s senior commanders were recently fired for their poor performance in Ukraine, according to the British MoD.

Lieutenant General Serhiy Kisel, who commanded the elite 1st Guards Tank Army, was suspended for his failure to capture Kharkiv and Vice-Admiral Igor Osipov, who commanded Russia’s Black Sea Fleet, was also “likely suspended” following the sinking of the cruiser Moskva in April.

The Moskva was sunk by two Ukrainian missiles in the Black Sea, off the coast of Ukraine on Wednesday, April 13.