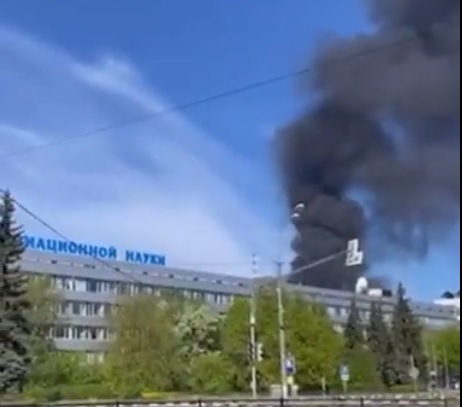 Russian firefighters have been battling a suspicious fire that broke out at the country’s aerospace institute, where many of their fighter jets have been developed.

The blaze, which broke out on Saturday, May 21, left thick black smoke in the sky over the Central Aerohydrodynamic Institute (CIA) in Zhukovsky, a facility involved in research on Russian warplanes.

The fire began at a power substation supplying the institute, 43 miles southeast of Moscow, as fears of a Ukrainian sabotage programme grow.

Central Aerohydrodynamic Institute (TSAGI) in #Moscow, set on fire on May 21st, is a government military aerospace research institute. 22 miles (35km) away from the #Kremlin. Rumors that various missiles were under development at this facility. Very dark smoke. pic.twitter.com/4fhfmbSJrN

The CIA is a key defence institute, having been crucial to the development of aircraft such as the Su-27, MiG-29, and MiG-31 fighters as well as many of Russia’s rockets.

This and other mysterious fires, at oil depots and power sub-stations, may have been sabotage attacks by Ukraine or the country’s supporters.

Professor Douglas London, of Georgetown University’s School of Foreign Service, and a retired 34-year CIA operations officer, told Foreign Policy journal that some recent incidents, including oil deport fires, may have been sabotage linked to the war.

He said:: “US and allied enabling of a Ukrainian sabotage campaign inside Russia telegraphs a significant and escalating cost Putin can ill afford.”.

Vladislav Lobaev from Russia’s leading independent gun-maker urged the authorities to be more suspicious of sabotage over the wave of fires after the Dmitrievsky chemical plant in the city of Kineshma burned down.

He said: ”’It is the largest Russian manufacturer of chemical solvents used in a variety of industries. Separately, the building of the defence research Institute in Tver burned to the ground.

“It was at this institute that the Iskanders and the S-400 were developed.”

He warned: “It is hard to believe in such coincidences, especially with large or such iconic enterprises.

“In wartime, it is necessary to work out the version of sabotage more actively.”

So far, there has been little comment from the Kremlin as another suspicious fire breaks out, this time at a key Russian aerospace institute.