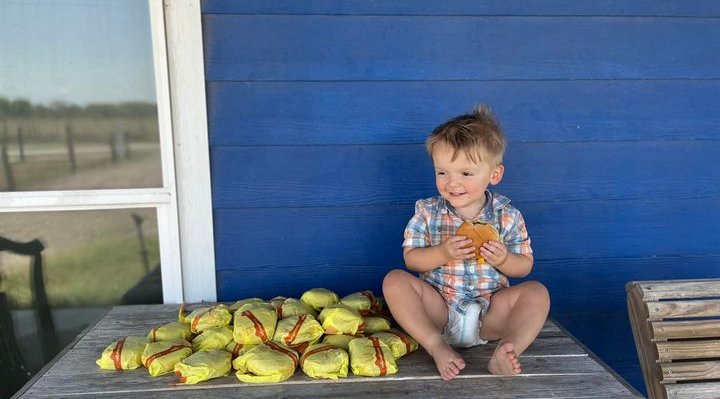 Mom gets a lesson from her 2-year-old as she leaves her phone unlocked Image: Kelsey Golden FB Page

A mother who left her phone unlocked and with her 2-year-old got an expensive lesson when he ordered 31 cheeseburgers online and for delivery.

Kelsey Golden’s 2-year-old son Barrett used her phone while she was working to order the meals from home delivery company DoorDash, in Texas. Barrett while playing with the phone managed to order the 31 McDonald’s much to his mom’s surprise.

Speaking to CNN, Golden said that she was working on a school’s annual yearbook when the young man pulled the phone away from her. She explained that he loves the camera on the phone, saying: “He likes to look at his reflection.”

But this time: “He started pressing the screen, swinging it around like his arm is a roller coaster.”

Golden received a message saying her order was taking longer than usual, and although she hadn’t ordered anything, she knew that sometimes her school going children did.

She called a colleague to check, only to find her children were eating the packed lunches she had sent for them. But as she was given the update, a car pulled up outside, so she went over. “A car pulls in and I was like, ‘what’? so I went over to it, and she gets out a giant McDonald’s bag and is like ’31 cheeseburgers?'”

Thinking the driver was at the wrong house, she was about to send him away when she thought she best check her phone which was still unlocked, and that’s when she got the surprise.

She said: “It dawned on me that Barrett was playing with my phone.

“I went back and looked at my phone and an order was placed at that time that he was playing with my phone.”

“I thought, oh my gosh, he really did this.”

Sadly, no one in her family likes cheeseburgers, so Golden offered them to locals through her Facebook page, and then she says: “It kind of blew up from there.”

The ordeal cost Golden a little under $100 (€90), however she is sanguine about the whole affair, saying that she hopes it helped brighten the day for a few people and that maybe others will have learned from her mistake. What she didn’t expect was for her post to go viral.

Many people allow their young ones to play with their phones, but as this mom learned, make sure that your phone isn’t unlocked or that the security on the phone doesn’t allow little ones to make orders you didn’t want or need.