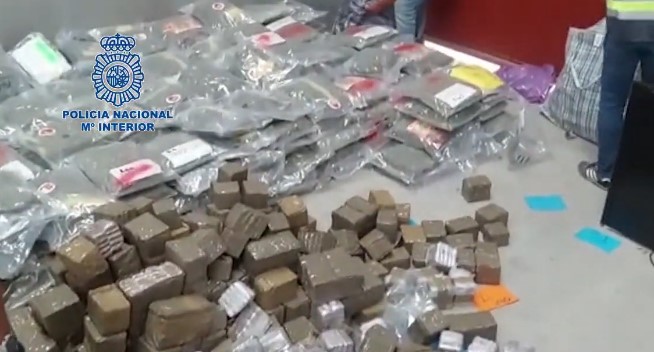 Three men have been arrested for shipping narcotics hidden inside furniture in the Malaga municipality of Monda.

As reported this Sunday, May 22, by the National Police, a criminal plot dedicated to hiding narcotics in false bottoms of items of furniture – which were later transported to the United Kingdom – has been broken up. Three men were detained for their alleged involvement in the crimes of drug trafficking, and belonging to a criminal organisation.

‘Operation Delicias’ was initiated at the beginning of May. Officers assigned to the Organized Crime Group of Fuengirola Local Police Station received information that pointed to the existence of a criminal plot dedicated to storing narcotic substances in an industrial warehouse. Thought to be located in the Malaga municipality of Monda, it was believed to be used as a drug nursery.

Continuing with their investigations, the warehouse in question – thought to be the centre of the network’s activities – was eventually located. After confirming suspicious movements around the facility, the police decided to intercept and identify three men who were observed leaving the building.

A search of the warehouse was carried out, which at first glance, appeared to contain several couches and divans. Eventually, the officers discovered that the network had created ‘false bottoms’ in the items of furniture, inside which, narcotic substances were hidden.

As a result, the National Police confiscated 514 kilograms of marijuana buds, and another 621 of hashish. The three men were arrested for their alleged participation in the events. According to the investigations, the drugs were destined for the United Kingdom, from where the three detainees originated.

Subsequently, three house searches were carried out. In one of them, the remains of bundles usually used to transport hashish were found. These facts were handed to the Investigating Court No3 of Coin, which ordered the imprisonment of the three detainees.