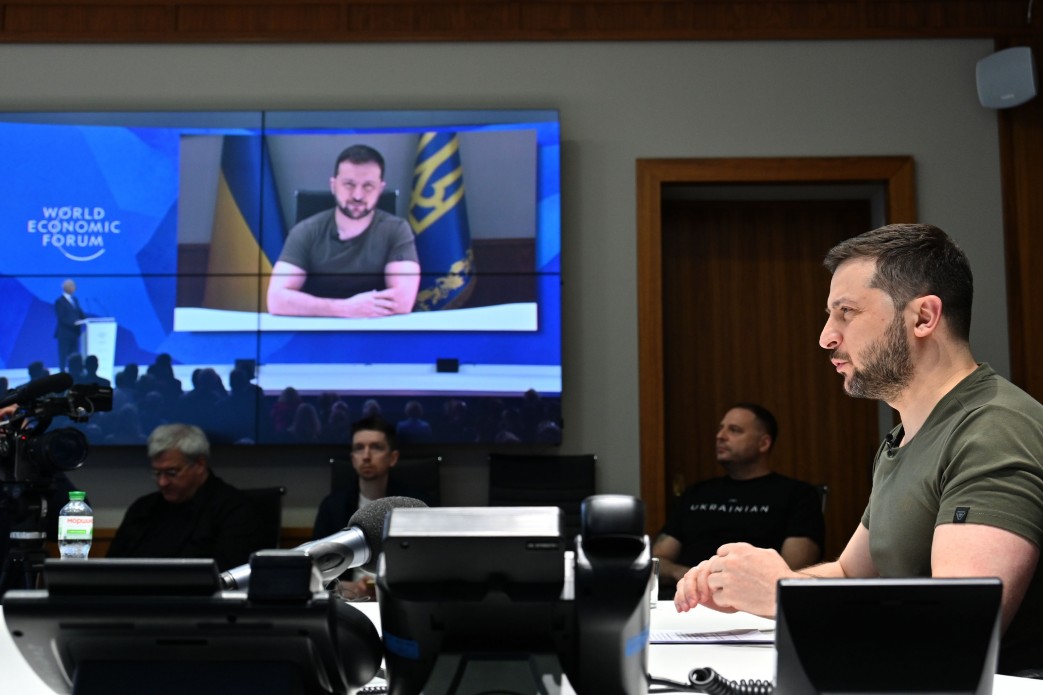 Speaking remotely to the international non-governmental and lobbying organisation on Monday, May 23, President Zelensky called for “maximum” sanctions against Russia and stated that the money needed by his country back in February would have saved the lives of thousands of Ukrainians.

“This is what sanctions should be: They should be maximum, so that Russia and every other potential aggressor that wants to wage a brutal war against its neighbour would clearly know the immediate consequences of their actions,” the 44-year-old said.

On Friday, May 20, the president said that Russia should also pay compensation for all the losses inflicted on Ukraine through its aggression.

Prior to speaking at the forum, the actor-turned-politician had revealed that “Ukraine has a monthly budget deficit of $5 billion (€4.7 billion)” and required more financial support from nations around the world, not just for Ukraine, but for “their own security”.

At the Davos Forum on Monday, May 23, Mr Zelensky said that the money was due to the enormous amount of work needed to rebuild Ukraine: “We have more than half a trillion of dollars in losses, tens of thousands of facilities were destroyed. We need to rebuild entire cities and industries.”

Following his appearance, the Ukrainian president, who recently celebrated three years in the country’s top job, thanked the World Economic Forum for allowing him the stage.

“I am grateful for this opportunity to take part in the discussion at the Forum. The general theme of Davos this year is: History at a Turning Point: Government Policies and Business Strategies. And this year the words “turning point” are not just a rhetorical figure,” he said on Monday, May 23.

He continued: “This is really the moment when it is decided whether brute force will rule the world. If it reigns, our thoughts won’t matter to it. And we may no longer convene in Davos. Because what for?

“Brute force seeks nothing but the subjugation of those it wants to subdue. And it does not discuss, but kills at once, as Russia is doing in Ukraine right now, right at this time when we are talking.”

The charismatic leader also used the platform to speak about Russian war crimes.

“By the way, please look at the building of the former Russian House in Davos. It has been turned into a house of Russian war crimes.

“And this is an example of their transformation. What Russia has done to itself by becoming a state of war crimes. And what it brings to the world. Inspiring other potential aggressors.

“Instead of successful peaceful cities – black ruins. Instead of normal trade – mined sea and blocked ports in Ukraine. Instead of tourism – closed skies and thousands of Russian bombs and cruise missiles.”

Recently, following the first trial of a Russian soldier for war crimes in Ukraine, 21-year-old Vadim Shishimarin was sentenced to life in prison.

The Russian soldier received the sentence after pleading guilty to murdering an unarmed 62-year-old Ukrainian civilian.