Endesa launches its largest wind farm yet, in Zaragoza 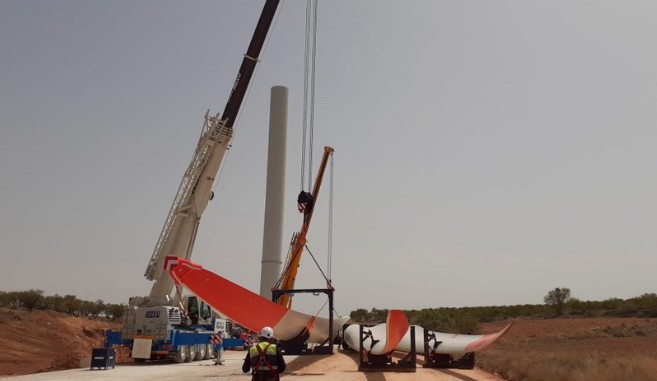 Energy supplier Endesa has launched its newest and largest wind farm to date, in Zaragoza

This Tuesday, May 24, Endesa launched its largest wind farm in Spain, located in the Zaragoza town of Villar de los Navarros. The project has been named ‘Tico Wind’, and can generate up to 180 MW of power. It has come to fruition through its renewable energy subsidiary Enel Green, following an investment of €181m.

Construction of this energy park began in May of last year. As part of an initiative to create shared value in the local communities where the company operates, the company has held parallel training courses in panel assembly and the maintenance and operation of solar plants.

Endesa has trained more than 2,100 people in the renewable sector throughout Spain. According to the electricity company, this has allowed them to access a booming labour market.

It pointed out that in the construction of the Zaragoza park, the peak of employment reached 330 workers. This number was distributed between their own employees and contractors for the project. Specifically, of the Tico Wind workers, 30 per cent were from Villar de los Navarros and its surrounding municipalities.

As explained by the electricity company, the new plant will generate about 471 GWh each year. From the point of view of sustainability, it has the potential to eliminate the equivalent of about 192,200 tons of CO2 emissions annually.

At the same time, the plant’s output will save the purchase of up to 88 million cubic metres of gas from foreign sources each year. These will be replaced by renewable energy of national production, which is more sustainable, and cheaper.

Part of this generated energy will go to the medical company Novartis (a multinational company dedicated to the pharmaceutical and biotechnology industry) pointed out Endesa. Enel Green Power in Spain signed a Virtual Energy Purchase Agreement (VPPA) with Novartis in 2020, for the supply of about 78.5 MW of electricity from its start-up, for 10 years.

This deal will help to address part of Novartis’ carbon footprint across its European operations, and will eliminate around 96,000 tonnes of CO2 per year.

In the last three years, Green Power Spain has connected 19 wind farms to the grid in the provinces of Teruel and Zaragoza. These generate a combined total capacity of up to 685 MW, from an investment of around €680 million.