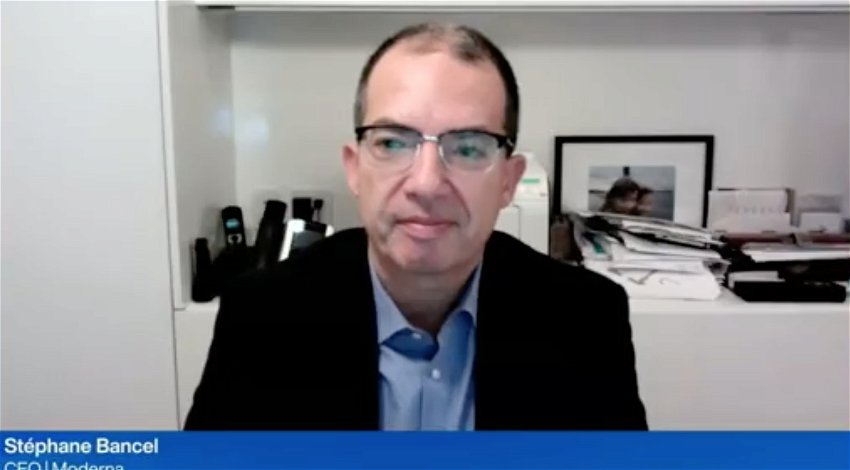 Moderna forced to bin millions of Covid vaccines because 'nobody wants them'. Image: Bloomberg TV/ Twitter

THE CEO of Moderna, Stéphane Bancel, admitted that the company had been forced to throw away millions of Covid vaccines because ‘they have a big demand problem.’

The shocking revelation was made during the World Economic Forum event in Switzerland, when the Moderna chief said: “It’s sad to say, I’m in the process of throwing 30 million doses [of the Covid vaccine] in the garbage because nobody wants them. We have a big demand problem.”

Bancel admitted attempts to flog them to governments around the world had been a bust.

“We right now have governments – we tried to contact … through the embassies in Washington. Every country, and nobody wants to take them.”

“The issue in many countries is that people don’t want vaccines.”

"it's sad to say, I'm in the process of throwing 30 million doses in the garbage because nobody wants them. We have a big demand problem."

On Tuesday, May 24, the Frenchman announced that he was going to sell his stock options for around 642 million dollars (600 million euros), with proceeds going to projects of non-governmental organisations.

Speaking to his shareholders, Bancel said to prevent “uninformed comments about my motivations” in the coming months, he “wanted to share this news now and to provide you with transparency on our plans.”

The CEO revealed that he would get rid of 4.59 million shares at an average price of 140 dollars. At that amount, after taxes, he hopes to donate 355 million dollars (330 million euros) to social projects.

Bancel has accumulated those stock options since joining the US company in 2013. He said he makes this decision before the stock compensation plan expires in 2023.

In order not to alter the company’s price, he will sell two batches of 40,000 shares each week until June of next year.

Shares of the biopharmaceutical have shed more than 40 per cent of their price so far this year and are worth nearly four times less than their August 2021 high, due to slower orders for its mRNA vaccine.

Even so, its capitalisation is almost seven times its value before the pandemic, when the company did not have any products on the market.

Last year, Moderna earned 15,000 million thanks to the sales of its Covid-19 vaccine, one of the most used after the Pfizer/BioNTech vax.

“Moderna has provided my family with financial security the likes of which I never imagined or, frankly, sought,” Bancel said.

According to Bloomberg, Bancel has a fortune of around 3,725 million euros. “If we don’t exercise this stock option, it will expire and be worth nothing. As such, our choice is clear: exercise the option and use this moment to create positive change in the world.”