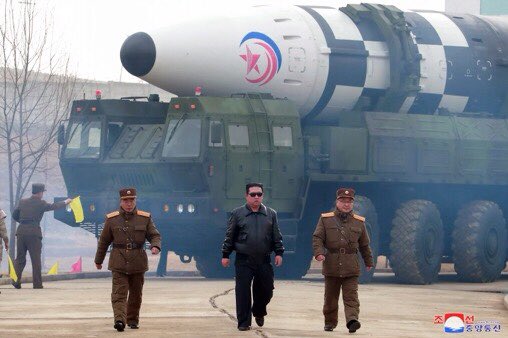 The Joint Chiefs of Staff (JCS) said that missile launches were detected from the Sunan area in Pyongyang early on Wednesday, May 25.

According to the JCS, in what they counted as the ’17th show of force from the North already this year’, launches were detected at around 6 am, 6.37 am and 6.42 am.

The first was the suspected ICBM, which flew 360 kilometres at a top altitude of 540 km, the JCS said. They noted that it could have been North Korea’s newest Hwasong-17 ICBM.

“The North’s ICBM launch is yet another case of its breach of a moratorium on ICBM launches that it itself pledged to the international community, and the launch is violation of U.N. Security Council resolutions and a serious provocative act,” the JCS said.

“Our military is monitoring related movements in preparation against the possibility of additional provocations by the North, and is maintaining a full readiness posture to ensure an overwhelming victory at all times,” it added.

It is believed that the second missile – a short-range ballistic missile (SRBM) – failed to launch, the JCS said, while the last missile, was thought to be another SRBM.

On Friday, March 25, North Korea’s leader Kim Jong-un gave the orders for testing, which was the first full ICBM test by nuclear-armed North Korea since 2017, who oversaw the launch of what was described as a “new-type” of ICBM, the Hwasong-17.

“In response to North Korea’s ICBM launch, our military jointly fired missiles from ground, sea, air at 4.25 pm in the Sea of Japan,” Seoul’s Joint Chiefs of Staff said in a statement at the time.