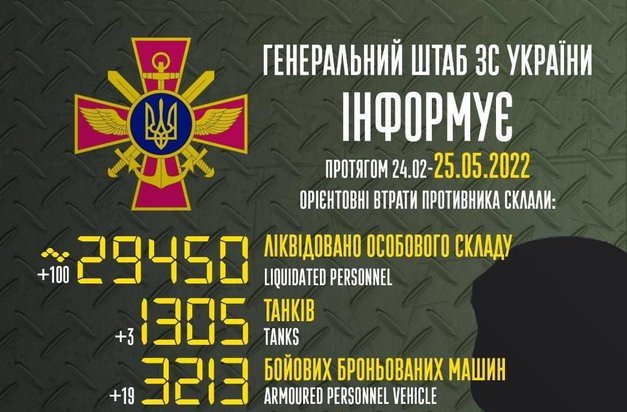 ON Wednesday, May 25, Ukraine’s Ministry of Defence published updated figures of combat losses inflicted on Russian forces since the beginning of the war.

Another 19 Russian forces Armoured Personnel Carriers (APCs) were destroyed by Ukrainian forces on Tuesday, May 24, according to Ukraine’s military update on Russia’s combat losses since February 24.

Around 100 more soldiers from Russia were killed by Ukrainian forces, which saw the number of Russian soldiers that have lost their lives fighting in the conflict rise to around 29,450, according to Ukraine’s MoD.

The other significant increase in figures is the loss of unmanned aerial vehicles (UAVs), which has risen by 11. This takes the number of Russian UAVs destroyed by the Ukrainian army to 491.

The General Staff of the Armed Forces of Ukraine revealed that Putin’s army had suffered the greatest losses on Tuesday, May 24 in the Limansky region.

A detailed breakdown of the 91st day of the war also shows that the loss of the 19 Russian APCs now means Ukraine has destroyed 3213 in total since the beginning of the conflict, while the destruction of 5 more vehicles and fuel tanks means that Russia has lost 2217 in total.

Ukraine also reported that they had destroyed one Russian aircraft and three tanks.

The number of Russian tanks destroyed by Ukrainian forces is now up to 1305.

Ukraine will be able to add a missile takedown to the combat losses of Russia in their data release on Thursday, May 25, after confirming one had been shot down over the city of Zaporizhzhia.

Early on Wednesday, May 25, Russian forces fired four missiles at the city of Zaporizhzhia, one of which was destroyed by Ukrainian air defence systems, according to the regional military administration.

One person was killed, and three more were injured in the attack, according to early reports.

The missile attack was launched at around 5.13 am and destroyed 62 buildings.

Although one was shot down, the other three attacked two districts of the city – the Shevchenkivskyi district and a shopping centre in the Oleksandrivskyi district.