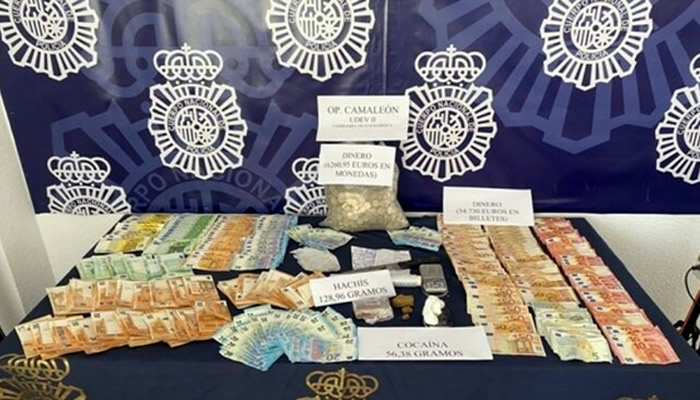 A drugs point of sale in the Mijas Costa municipality of Calahonda has been closed down, with two arrested

In a statement released today, Thursday, May 26, the National Police revealed that officers have arrested two individuals at an address in the Costa del Sol municipality of Mijas Costa, specifically, in Calahonda. The officers also seized €60,990 in cash from the property, believed to have been converted into a lucrative retail drugs point of sale.

According to malagahoy.es, the two detainees are said to be aged 36 and 37, one of whom was allegedly the person in charge of the property. They have been charged with their alleged involvement in a crime against public health.

As a result of the entry and search of the property, in addition to the money, 128 grams of hashish, and another 56 of cocaine were confiscated. Two precision scales, as well as various tools for preparing doses, were also seized by the police. Three motor vehicles were also impounded.

‘Operation Chameleon’ was carried out by officers assigned to the Specialised and Violent Crime Unit (UDEV) of Fuengirola Local Police Station, following information informing them of the possible existence of a home in Calahonda being used to sell narcotics.

Their investigations quickly led to the discovery of the said house, and the occupant of the property was subsequently identified. During surveillance of the home, the police detected a significant movement of visitors, diligence that led to the making of several arrest warrants in the vicinity. The facts were placed at the disposal of the Investigating Court No1 of Fuengirola.