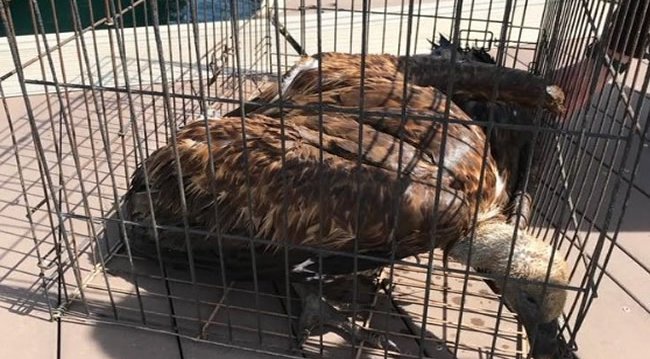 Several rescues of birds of prey have been carried out after they suffered attacks in Gibraltar, and the Cadiz municipality of La Linea.

Several birds of prey have had to be rescued in the last few days in both the Cadiz municipality of La Linea, and in the British Territory of Gibraltar. The birds – griffon vultures and eagles – were all believed to have suffered wounds from various attacks by seagulls and peregrine falcons.

In La Linea, workers from the municipal delegation of Parks and Gardens, led by councillor Raquel Ñeco, rescued a short-toed eagle on the eastern coast this Wednesday, May 25, while it was being attacked by several hawks.

The bird was guarded until the arrival of volunteers from the Centre for the Recovery of Endangered Species (CREA), who took charge of its wellbeing.

This is not the first time that the Parks and Gardens Department has acted to save the lives of animals in different areas of the Linense coastline. One notable intervention occurred two years ago when they located an adult eagle owl in the Venta Salvador area. It had one of its wings damaged, probably due to a blow, and was missing an eye with a healed wound.

Another incident in Gibraltar involved eight migratory birds of prey: five griffon vultures, two booted eagles, and a short-toed eagle. They were rescued this Wednesday, May 25, in a joint effort by the Gibraltar Ornithological & Natural History Society (GONHS), the Department of the Environment, and the Marine Section of the Royal Gibraltar Police.

Three griffon vultures were rescued from the sea, with one also recovered at St Martin’s School. A private boat picked up two booted eagles from the sea, and the short-toed eagle was rescued by a local on Devil’s Tower Road.

A swimmer saved another eagle in Catalan Bay last Monday, May 23, after the bird was attacked by peregrine falcons and seagulls. She sustained head and back injuries, and was malnourished.

Seven migratory raptors (four griffon vultures, two booted eagles and one short-toed eagle) were rescued today, in a joint effort by the GONHS, Department of the Environment, and RGP Marine Section. pic.twitter.com/zs0229MHM1