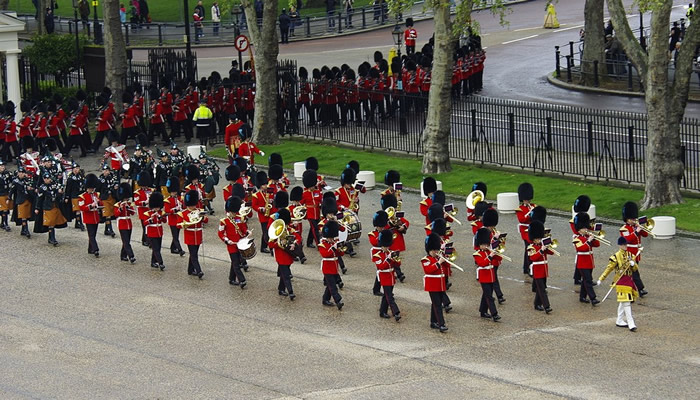 Soldiers from the Queen’s Guard have been arrested in a drugs sting operation carried out by the Royal Military Police.

A report by The Mirror this Thursday, May 26, has revealed that an intricate sting operation carried out by the Royal Military Police resulted in the arrest last Wednesday, May 25, of several members of the Queen’s Guard.

This incident comes just one week before the Platinum Jubilee celebrations are due to begin. According to the report, a veteran ex-sergeant from the Coldstream Guardsman, and six serving Irish Guards, have been detained on suspicion of conspiracy to supply drugs. They also face charges of money laundering and loan shark operations.

Raids reportedly took place in Northern Ireland, North Wales, and Hampshire, in the finale of an operation that had apparently been many months in the planning stage. Five of those arrested have since been released on bail, and will not take part in the parades to celebrate the Jubilee.

Next Thursday, June 2, under the gaze of the Royal Family standing on the Buckingham Palace balcony, the regiment, in its traditional red tunics, is scheduled to lead the Trooping of the Colour parade.

“As part of a planned operation, the Royal Military Police arrested six Irish Guards soldiers and a Coldstream Guardsman veteran from across the UK on suspicion of conspiracy to supply drugs and money lending and laundering offences”, an Army spokesperson told The Mirror.

They added, “The Army does not tolerate any type of illegal or fraudulent behaviour. As this is now the subject of an independent Royal Military Police investigation, it is inappropriate to comment further”. It was made clear by the MOD spokesperson that none of the arrests occurred at the Royal Military Academy Sandhurst.

“They came in like the DEA (US Drug Enforcement Administration) – kicking down doors”, a source from the Aldershot Mons Barracks, told The Sun. Those are the barracks where the 1st Battalion Irish Guards are based.

The source added: “There was no warning. We were told they had been planning the operation for months. It wasn’t just the barracks. They searched the soldiers’ homes off base. It’s all come as a huge shock”.