Real Madrid are champions of Europe for the 14th time 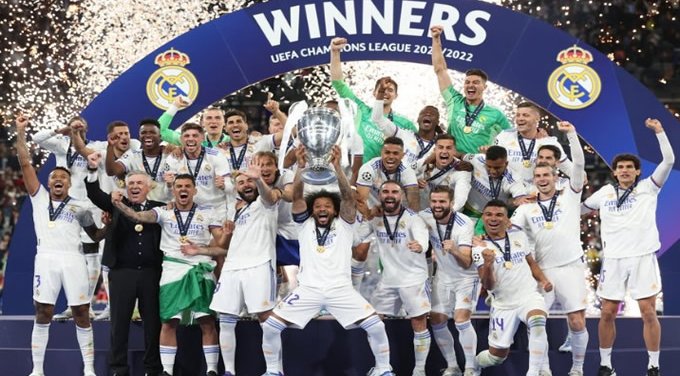 After a 1-0 win over Liverpool in the Champions League Final, Real Madrid are the kings of Europe for the 14th time.

A thrilling Champions League final between Real Madrid and Liverpool this evening, Saturday, May 28, was settled by one single goal. Vinicius Junior’s goal for the Spanish side after 59 minutes was all that separated these two footballing titans but was enough to give Madrid their record-extending 14th European crown.

Huge credit for their victory has to go to Belgian goalkeeper Thibaut Courtois, who almost single-handedly kept his Real Madrid team in the game. Three outstanding stops from Liverpool striker Mo Salah, and another shot from Sadio Mane turned onto the post stopped the Reds from scoring, in what was a goalkeeping masterclass. Gary Lineker tweeted: “Courtois is quite good”.

Jurgen Klopp on the other hand, having chased a historic quadruple this season, now has to settle with being runner-up in the Premier League and the Champions League, after securing both the FA and Carabao Cups.

The kick-off at the Stade de France in Paris was delayed by 30 minutes after thousands of Liverpool fans were involved in chaotic scenes outside the stadium while trying to get into the ground. Video footage uploaded on social media clearly showed French police pepper-spraying the Liverpool supporters.

Liverpool chiefs have already said they will demand a full investigation into how the Spanish fans managed to enter the ground one hour before the match while Liverpool fans were left outside, with large numbers of supporters crammed into small spaces as they attempted to make their way into the stadium.