Ferrari disappointed with their performance in the Monaco Grand Prix 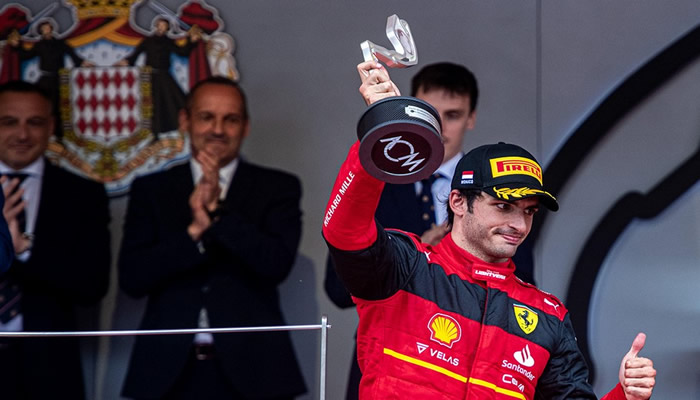 The Monaco Grand Prix result was a huge disappointment to the Ferrari Formula One team.

An official newsletter from Ferrari, released today, Monday, May 30, spoke of their huge disappointment with the result of the Monaco Grand Prix. Here you can read what they had to say.

In a rain-affected Monaco Grand Prix on Sunday, May 29, Scuderia Ferrari was unable to turn its front-row qualifying into the result it was hoping for and had to settle for 30 points. This came courtesy of a second-place for Carlos Sainz, and a fourth for Charles Leclerc, in what was a particularly frustrating race for the Monegasque driver.

Just prior to the start, it began to rain heavily, with the race start delayed for over an hour, after the cars had completed two laps behind the Safety Car on a very wet track. Once the race was underway, the track soon started to dry. On lap 16, the first of the front runners to pit and switch from wet ti Intermediate tyres was Sergio Perez.

Leclerc made the same change two laps later, as did Max Verstappen. Sainz however, stayed out until lap 22, switching straight to slicks and it was decided to do the same with Charles, calling him in at the same time for a double stop.

This played into Red Bull’s hands as Sergio Perez managed to get ahead of Carlos and Verstappen did the same with Charles. The race was more or less over at this point, although it was stopped one more time after Mick Schumacher had a huge accident at the swimming pool, from which he, fortunately, emerged unscathed. The F1-75 was faster than its rivals but the positions remained unchanged.

Next stop for Ferrari in the F1 calendar is Baku, and the Azerbaijan Grand Prix, which takes place on 12 June.

“It was a tough race but overall I cannot be too disappointed”, commented Carlos Sainz. He continued: “We made the right call to go from wet tyres to slicks but unfortunately a lapped car in my out-lap cost me too much time and we missed the opportunity to take the lead. After my pit stop, I rejoined right behind Perez and that was it”.

“Overtaking here is extremely challenging and with some wet patches off the racing line it was even more difficult today. It is a tough one to digest because the win was there for the taking, but I gave it my all out there and we’ll come back stronger as a team for the next doubleheader”, he assured.

Charles Leclerc explained: “I’m disappointed to have lost this win and it’s a tough one to take, especially at home. It will be important to understand exactly what happened to make sure that this doesn’t happen again”.

“In the first pit stop, we went from extreme wets to intermediates, and got undercut by Perez. Three laps later, I stopped again, behind Carlos, and lost two more positions. It’s just impossible to overtake in Monaco without taking huge risks, so I stayed put to bring home as many points as possible and I guess that fourth is the best we could do under these circumstances”, he continued.

“Mistakes happen, unfortunately, today we made too many. I love my team and I am sure that we will come back stronger”, he concluded.

Mattia Binotto, Team Principal & Managing Director of Ferrari had his say: “When you start with your two cars on the front row and you don’t win, it means something went wrong from our side. I think we made a few poor decisions and we paid the price. I am sorry for Charles, because it’s his home race, so it was particularly important for him, as indeed it was for all of us”.

He pointed out: “There were other elements that affected today’s result, such as the traffic that both our drivers encountered when they rejoined the track after their pit stops, a factor that probably cost Carlos the win. Mistakes can happen, but it’s important to learn from them, and take them as an opportunity to improve. Over the next few days, we will analyse this race in detail, as part of our preparation for the upcoming back-to-back races in Azerbaijan and Canada”.