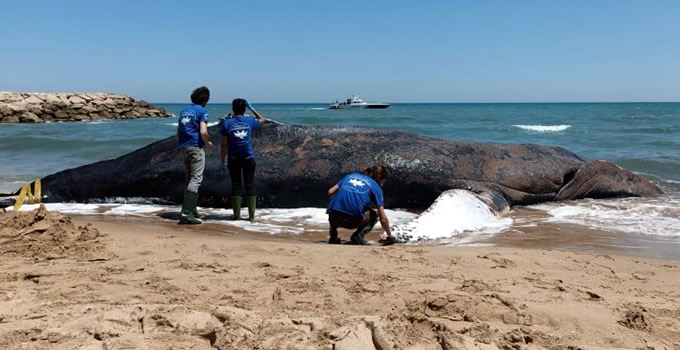 Image of the humpback whale washed up on a Valencian beach. Credit: [email protected]_vl

A 46ft long humpback whale rescued from an illegal drift net off the coast of Mallorca has died on a beach in Valencia.

Just days after being rescued from an illegal drift net that was preventing it from opening its mouth, a 30-ton, 46ft long humpback whale has died. It washed up this Thursday, May 27, on a beach near the Spanish city of Valencia, just 190 miles from the Balearic island of Mallorca where the original rescue had taken place on May 20.

The huge mammal had been freed from the net by a team of divers from the aquarium in Palma de Mallorca, after it was spotted in trouble about three miles off the coast. The divers swore that before swimming off, the majestic creature made a ‘thank you’ gesture to them.

Jose Luis Crespo, head of conservation for the Valencian Oceanography Foundation – who examined the enormous whale after it washed up on the beach in the town of Tavernes de la Valldigna – revealed that the stranded creature had several cuts to its dorsal fin, and was extremely weak. It sadly died shortly after being checked over by the marine specialists.

“We would have caused more injuries and made its condition worse, and it would possibly have been back on the sand the next day”, explained Mr Crespo.

“It is horrible. This has been really depressing”, commented 32-year-old Gigi Torras, a marine biologist. She owns the Albatros diving centre in Mallorca and was one of the original rescuers. Ms Torras described how during the rescue: “The first 10 seconds she got a bit nervous, you know, like bubbles everywhere”.

“But then, call me crazy, I think she knew we were there to help her, and she just relaxed, and we started working from the front of her mouth backwards”, she added.

This type of drift net that snared the whale was banned 30 years ago by the United Nations because of the danger they present to marine life. Nicknamed ‘Walls of Death’, they are almost invisible to sea creatures and can drop to a depth of around 50ft in the sea while attached to a cork line.

They were designed for catching fish, but in the process, were also known to have snared dolphins, seals, whales, and even sea birds. These nets have been illegal for three decades. They do not target anything but just capture everything. I hope this opens people’s eyes to the damage they are causing to the oceans”, lamented Ms Torras.