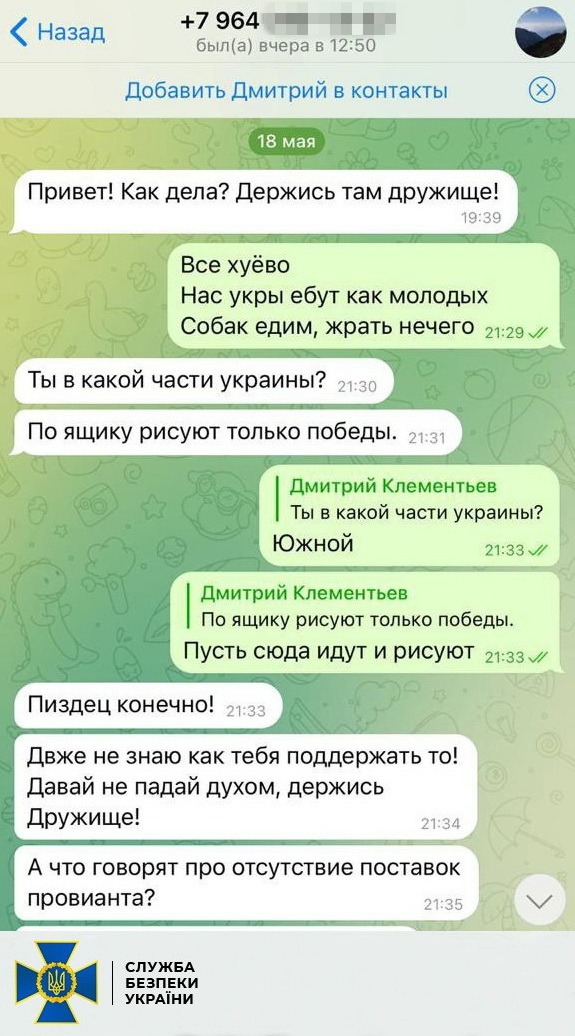 CORRESPONDENCE intercepted by Ukraine’s Security Service reportedly reveals that due to problems with Russian logistics, some of Putin’s soldiers have been left eating dogs.

Messages between two Russian soldiers have allegedly unearthed the shocking eating habits of those left fighting in Ukraine, with one of Putin’s army even naming the breed of dogs they’ve eaten.

“This is evidenced by the correspondence of the Russian aggressor, which was intercepted by the SBU.”

The update from the group then goes on to describe the conversation between the two soldiers.

One soldier said to another: “Everything is crazy. We are sheltered as young people. We eat dogs, there is nothing to eat. Today we ate a Yorkshire Terrier.”

According to the Russian soldier – who is located in the temporarily occupied territory of Kherson – “they have no food because the army has no logistics, and products simply can not be delivered.”

The security service added: “This contrasts sharply with the “victorious” picture broadcast on Russian television. So, to the surprised remark of a friend that the media “draws only victories”, he simply answers: “Let them come here and see.”

“And to make a living, Putin asks to borrow money… However, they are not winning as you may see on TV.”

Reports such as this, mixed with the fact that Russian forces continue to suffer huge losses, are the reasons some soldiers fighting for Putin are looking to get out of Ukraine as soon as possible.

In fact, following the destruction of a large unit of the Wagner Group – a network of mercenaries and a de facto private army of Russian President Vladimir Putin – in the Donbas region, many Russian soldiers are said to be too afraid to fight.

According to the Security Service of Ukraine on Tuesday, May 31, Ukrainian guerrillas took out a large group of “Wagnerites” in Donbas and after the destruction of such an “elite unit”, Russian soldiers “are now afraid to fight.”