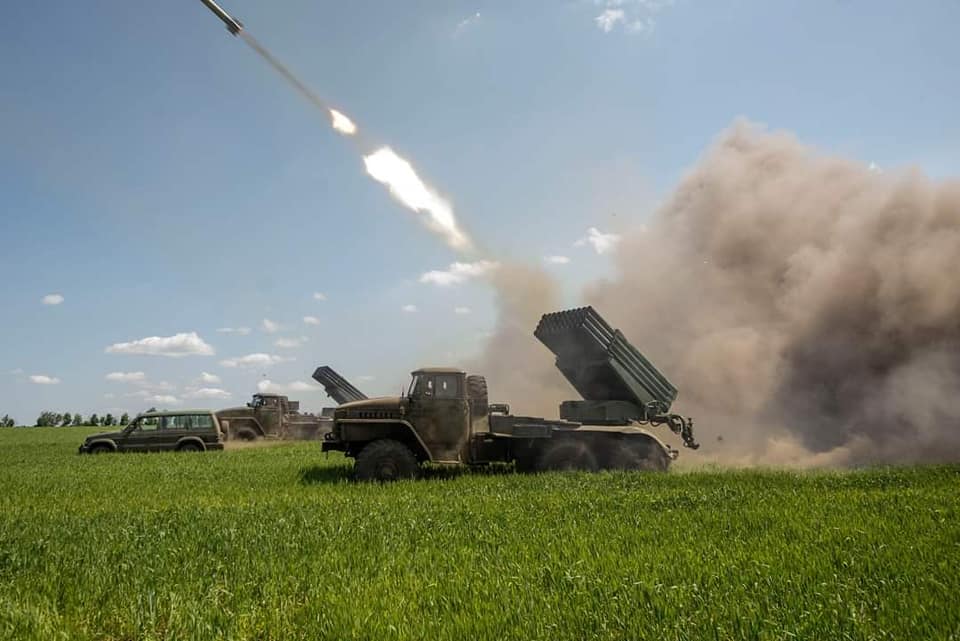 THE General Staff of the Armed Forces of Ukraine has provided its latest operational update on the ninety-seventh day of the Russian invasion of its country.

Ukraine’s Armed Forces provided its operational update on the Russian invasion on Tuesday, May 31 and noted the “threat of missile and air strikes from the territory of the Republic of Belarus continues.”

A spokesman for the General Staff of the Armed Forces of Ukraine, Alexander Štupun, said: “In the Volyn and Polissya areas, the main efforts of the Armed Forces of the Republic of Belarus are focused on strengthening the protection of the state border, engineering equipment positions, conducting reconnaissance and conducting combat training activities in the interaction of types and genres of troops.

“Russian enemy did not take active action in the northern direction. The enemy carried out mortar shelling of settlements in the border areas of the Chernihiv and Sumy regions,” he said.

“In the Slobozhansky direction, the enemy continues to prepare for the offensive, studies the probable ways of advancing, supplying weapons and military equipment, and material resources from the territory of the Russian federation.

“The enemy did not take active action in the Kharkiv direction. He fired on civilian infrastructure in the areas of the settlements of Terny, Lozova, Protopopivka, Rudneve, Sokolivka and others.”

He continued: “In the Slovyansk direction, the enemy’s main efforts are focused on maintaining the occupied frontiers and supply routes, creating conditions for further offensive. It fired on civilian infrastructure in the areas of Dovhenke, Virnopillya, Hrushuvakha and Velyka Komyshuvakha.

“There was an attempt to storm in the area of ​​Dovhenke, the enemy was unsuccessful, and retreated to previously occupied positions.

“In the Donetsk direction, the enemy is firing units of our troops with mortars, artillery and rocket-propelled grenade launchers along the line of contact. The main efforts are focused on establishing control over the city of Sievierodonetsk. Actively uses means of electronic warfare.

“In the Lyman direction, the enemy regroups and prepares for the offensive. He tried to reconnoitre the routes of further advance in the area of ​​the settlement of Lyman, suffered losses, and withdrew.”

“In the Sievierodonetsk direction, it is conducting assault operations in the areas of the settlements of Sievierodonetsk and Toshkivka, and hostilities continue,” he said.

According to intelligence from the British Ministry of Defence on Tuesday, May 31, “Russia will need to secure further challenging operational objectives beyond Sieverodonetsk, including the key city of Kramatorsk and the M04 Dnipro-Donetsk main road.”

Alexander Štupun continued: “In the Bakhmut direction, the enemy conducted combat and assault operations in the areas of the settlements of Zolote, Komyshuvakha, Nyrkove, Berestove, Pokrovske, and Dolomite. There is no success, the fighting continues.

“In the Avdiivka, Kurakhiv, Novopavliv and Zaporizhzhia directions, the enemy is trying to strengthen the group and make up for losses due to outdated and restored equipment. Conducted air reconnaissance.

“Inflicted airstrikes on civil infrastructure in the areas of settlements Mala Tokmachka, Novoandriyivka.

“The enemy did not conduct active hostilities in the South Buh area. He inflicted fire on civilian objects in the settlements of Oleksandrivka, Prybuzke, Posad-Pokrovske, Novohryhorivka, Osokorivka, Knyazivka and Trudolyubivka,” he said.

“In the Bessarabian direction, in the Transnistrian region of the Republic of Moldova, no significant changes in the activities and position of the task force of Russian troops are observed.

“The main efforts of the ship groups of the Black Sea Fleet of the Russian Federation in the Black and Azov Seas are focused on maintaining a favourable operational regime and blocking civilian shipping in the northwestern Black Sea.

“In the temporarily occupied territories, the enemy continues to commit illegal acts against the citizens of Ukraine.

“During the previous day, the strike aircraft of the Air Force fired on some enemy units in the Kharkiv, Donetsk, Luhansk and Kherson regions. Anti-aircraft missile units in the Odesa region shot down an X-22 cruise missile.”

He concluded: “In the past 24hrs, eight enemy attacks have been repulsed in Donetsk and Luhansk, one tank, four artillery systems, five armoured combat vehicles and two enemy vehicles have been destroyed. Air defence units shot down an X-59MK cruise missile.”