Travellers criticise airport and airlines handling of delays and cancellations 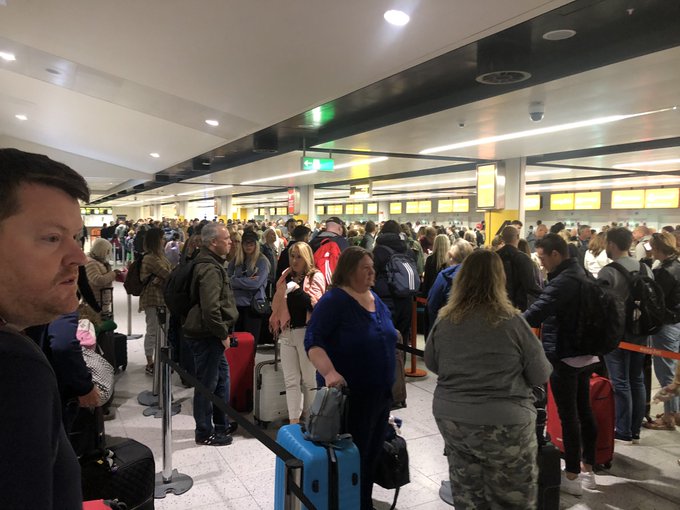 Passengers have criticised airlines and airport authorities in the UK for their poor handling of flight delays and cancellations.

Many passengers have taken to social media to air their grievances after they were delayed at airports across the UK over the weekend and on Monday, May 30.

The main complaint from passengers is the lack of information and the difficulties they experience in trying to make contact with anyone who can help. There is they say an information vacuum that makes the delay or cancellation experience worse. Few we spoke to said they were provided with any details of why the flight was cancelled or delayed and most were left to make sort their onward travel themselves.

Lynn, a first-time visitor to the UK and London passenger that we spoke to, said that flying into London Gatwick from Malaga Airport was enjoyable. The return however has proven a nightmare, and she is not alone.

Arriving four and a quarter hours before her five o’clock flight, Lynn joined the long queues. Not long after the passenger in the queue behind her received an email saying the flight had been cancelled, simply cancelled with no explanation or advice on what to do.

Given that the departure display board didn’t contain the same message they waited in the queue until they reached the WizzAir check-in desk. The check-in person was unaware the flight had been cancelled and suggested they go wait in Area H and somebody would be along to up them.

After waiting an hour they went to the customer service desk only to be told the airline could not accommodate them until June 3, with all flights overbooked.

They returned to Area H where more than an hour later, an airport representative arrived (not a WizzAir staff member). He provided some explanation but could not or would not, say why the flight was cancelled.

He did explain that most airlines were fully booked and passengers were encouraged to see what alternatives they could find. They were also told that if you waited for some accommodation would be arranged or you could cancel your flight and you would get a refund.

With so many flights being cancelled and so many overbooked no options to go on standby was available, and nor were any other flights from Gatwick. Some flights were available from airports as far as Bristol, although while searching these flights were sold out.

Some flights were available from Heathrow, but with prices upwards of a £1,000 (€1,170) they weren’t considered an option.

Lynn eventually managed to find a flight on Wednesday for £400 (€473), but she doesn’t know whether that plane will leave or whether she will receive compensation or a refund.

Under the UK law airlines have a duty of care for passengers whose flights are cancelled within five hours of take-off, however, Lynn says either the airlines are ignoring that fact or the staff have not been made aware that this is the case.

At no time was she or her fellow passengers made aware of their rights, offered any food or drink vouchers or told what they could claim. Instead, all they were told is they could claim a refund.

Lynn has a number of questions for the government, the airport and the airlines, and she is not the only one.

With so many options for keeping passengers informed it seems bizarre that no is willing or able to keep everyone informed. A quick visit to Gatwick Airport’s Twitter account gives no indication of the delays, queues or cancellations. Likewise, the airline’s site is full of cheerful sales messages but no updates on the state of flights.

The internet is full of complaints from passengers saying it is impossible to get through to airlines, with calls to customer services going unanswered.

This is not a new issue but a repeat of the problems experienced during the pandemic, with airlines repeatedly failing to respect the law and refund customers appropriately. Why is this still the case?

Why does no one in the industry or the UK government seem concerned by the problems and the damage it is doing to the UK’s reputation? Yes, Lord Parkinson, the Arts Minister told Sky News this morning that the industry had months to prepare for the midterm break and that the Department for Transport was working with the industry to overcome the issues.

A statement from WizzAir said: “At Wizz Air, we always do our best to get our customers to their desired destination on time, without disruption, and to the highest safety standards. Unfortunately, a small number of our flights from Gatwick have been impacted by issues affecting the whole travel industry, including staff shortages. We continue to work closely with the airport and our ground handlers to minimise disruption. As always, Wizz Air encourages passengers to book directly on wizzair.com or via the WIZZ app, as opposed to with online booking platforms, to ensure they receive the most up-to-date information about their flight status. Wizz Air sincerely apologises for the inconvenience caused and has contacted affected customers directly to inform them about their rights.”

A spokesperson for Gatwick said on Tuesday: “The airport is operating normally today but will be busy today with around 720 flights. We continue to advise passengers to arrive at the airport as soon as check-in opens for their flight. Typically, this is 3 hours for long-haul and 2-2 ½ for short-haul.”

There are more questions

But it all seems too little too late for people like Lynn, who is stuck in London waiting for a flight.

Surely if the government were worried about the situation, more attention would’ve been paid to the information needs of passengers and their legal rights.

What Lynn really cannot get her head around is why no one is taking responsibility, and why when airlines and airports are aware that there are going to be delays or cancellations passengers are not forewarned. By all accounts many of these delays and cancellations are not news to the airline, so why is it left to the last minute to tell passengers.